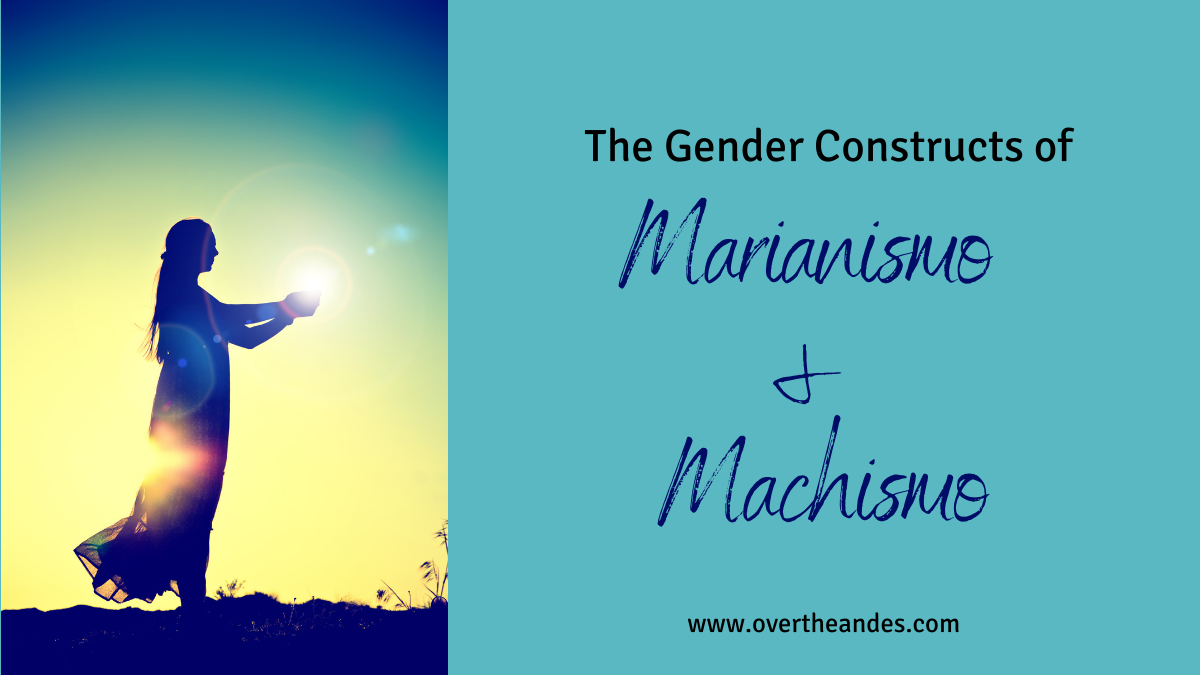 One of the topics we cover in Intro to Latin American Studies is Gender in Latin America.  Of course, this is a huge topic, upon which many research studies, books, thesis papers and projects have been based.  To break down the subject matter a little, we usually address four concepts and, around them, fit in discussion and further research. I was going to write one post on this but it ended up far too long! These two parts should be easier to digest.

Bear in mind this is not even the full tip of the proverbial iceberg.  It’s an introduction meant to whet inquisitive appetites and spark class discussion.

For today we’ll consider, define and compare Machismo and Marianismo.

‘Machismo’ is a Spanish term most closely linked to the word ‘macho’ used in English but which retains its Spanish meaning.

There are some English definitions/ translations of the word machismo as well.

The Cambridge Dictionary defines it as: Male behaviour that is strong and forceful, and shows very traditional ideas about how men and women should behave.

The Urban Dictionary gives a similar but clearly negative definition: Having an unusually high or exaggerated sense of masculinity. Including an attitude that aggression, strength, sexual prowess, power and control is the measure of someone’s manliness. Also, a machismo man feels having these traits entitles him to respect and obedience from men and women around him.

It may come as a surprise, but there are also some positive associations with the concept of machismo:

The light side of machismo is personified in the caballero who is a true protector in every sense of the word. El caballero protects his wife and family from all dangers.  He offers the best seat at the movies to his dama, stands up to give a woman his seat on the subway and helps with the heavy household chores. While he is still afflicted by machismo, el caballero personifies the sensitive side of a man who deifies rather than denigrates his wife.

Let’s also look at some of the negative connotations associated with the concept of Machismo:

A less familiar term is marianismo, which bears relation to the word Marian which is, in turn, linked to the Virgin Mary.

According to the Oxford Living Dictionary, marianismo is: A pattern of behaviour that is regarded as conforming to a traditional or archetypal female role; female submissiveness.

Origin of Marianismo: Used to refer to devotion to the Virgin Mary (Virgen María). The term was first used by political scientist Evelyn P. Stevens in her 1973 essay “Marianismo: The Other Face of Machismo“.

It was created in direct response to the male word machismo. It is the supposed ideal of true femininity that women are supposed to live up to i.e. being modest, virtuous, and sexually abstinent until marriage and then being faithful and subordinate to their husbands. In essence, marianismo is the female counterpart to machismo, and as such, probably originated during the time of the Spanish colonization of the Americas.  A Latina should strive to be the perfect marianista.

The fundamentals of marianismo:

Marianismo defines the ideal role of woman. And what an ambitious role it is, taking as its model of perfection the Virgin Mary herself. Marianismo is about sacred duty, self-sacrifice, and chastity. About dispensing care and pleasure, not receiving them.  About living in the shadows, of your men: father, boyfriend, husband, son. Aside from bearing children, the marianista, has much in common with una monja de convento, a cloistered nun.

While striving to achieve some of these virtues is commendable, the chastising and shaming of women who do not conform to those ideals is condemnable.  For many modern Latinx, marianismo is an invisible yoke restraining resourceful, bright and ambitious persons, who feel trapped between old world traditions and new world realities.

These carefully mined attitudes and constraints placed upon gender influenced how Latinx society was (and to some extent still is) shaped:

Women are seen to be ‘better’ than men in one way as women can exert self-control and have the ability to remain pure and pious.  Men, however, are seen to be weaker as they simply cannot control themselves.  This expectation placed on women and exoneration of men, by the same construct ultimately leads to injustice and conflict.

Parts II and III will discuss La Virgen de Guadalupe and La Malinche: the saint and the whore – figures widely discussed in academic gender literature.  How have these concepts limited the perceptions of women’s identity?

There is so much more to be said about the constructs of Marianismo and Machismo.  Anthropologists, psychologists and sociologists have studied them from several perspectives. Although, Evelyn P Stevens’ work was criticized as being too confined to middle-class Mexican women of her time, there are other researchers who have applied and studied these concepts across a broader Latinx cross-section.

Rosa Maria Gill and Carmen Inoa Vazquez wrote about how the ‘messages from the Latina’s culture’ clash with the demands of today in their book The Maria Paradox: How Latinas Can Merge Old World Traditions with New World Self-esteem.