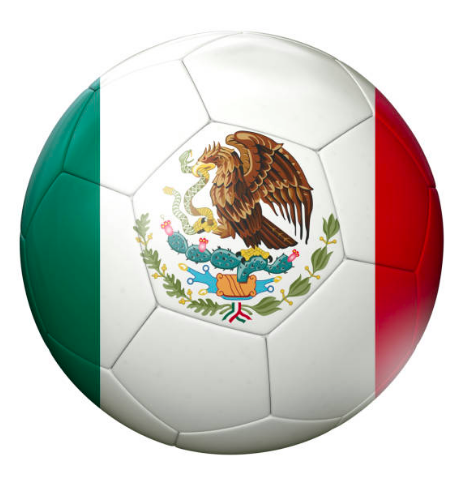 I had expected to do an Argentina World Cup post, similar to the one I did on Brazil.Â  Because who doesn’t think of Brazil and Argentina when it comes to Latin American football?Â  But when I was scheduling this post I’d almost given up hope for them qualifying for the next round!

Some of my friends know I have a soft spot for Argentina.Â  They were a bit mean after the Croatia game, sending incredibly funny but mean memes like this one…

Joke’s on them now!Â  Messi and his boys are through to play another day.

On a related note, I asked my two older boys if they know who Messi is.Â  The 5-year-old answered, â€œYes.Â  He’s a football team.â€Â  Well said kid! ðŸ˜‰Â ðŸ˜‚

So instead of featuring Argentina, I’ll focus on a team that started the tournament on a better note: MÃ©xico!Â  (I’ll forgive them the 0-3 to Sweden yesterday).

Eleven Facts About MÃ©xico in the World Cup

2Â  Mexico hosted the World Cup in 1970 and in 1986.Â  Those tournaments were won by Brazil and Argentina respectively, in final matches played in theÂ Estadio Azteca.

3Â  Including 2018, Mexico has qualified for sixteen World Cup tournaments; and has qualified every time since 1994, making it one of only six countries to do so.

4Â  Mexico, Brazil and Germany, are the only nations to make it out of the group stage in each of the last six World Cup tournaments.

5Â  The furthest Mexico has gotten in a World Cup tournament is the quarter-finals.Â  They achieved this twice.Â  Both times when they hosted the World Cup.

6Â  The Mexican team is sometimes referred to as El Tricolor or El Tri so named for its green, white and red uniform.Â  The uniform is representative of the tri-coloured Mexican flag.

Some bittersweet claims to fame

7Â  Mexico is the team to have qualified for the World Cup the most times without managing to ever win the tournament.

9Â  In 1988 Mexico was banned from competing in the 1990 World Cup played in Italy.Â  The country was found guilty of playing over age players at the 1988 Olympics, which was supposed to be a youth event.

Some Mexican Players of Note

10Â  The record for most appearances at the World Cup is jointly held by two players: Mexico’s goalkeeper Antonio Carbajal and Germany’s Lothar Matthaeus. Mexican defender Rafael MÃ¡rquez will match that number in Russia 2018.

11Â  Striker Javier Hernandez wears a jersey that reads Chicharito, Spanish for â€œlittle pea,â€ and has become one of Mexico’s most famous players. Â FIFA’s statistical analysis showed that HernÃ¡ndez was the quickest player in World Cup 2010, reaching a top speed of 32.15 km/h.

Mexican head coach Juan Carlos Osorio has demanded that his group â€œplay with the love of winning and not the fear of losing.â€

Great advice, not just for the World Cup aspirants but for all of us as well.