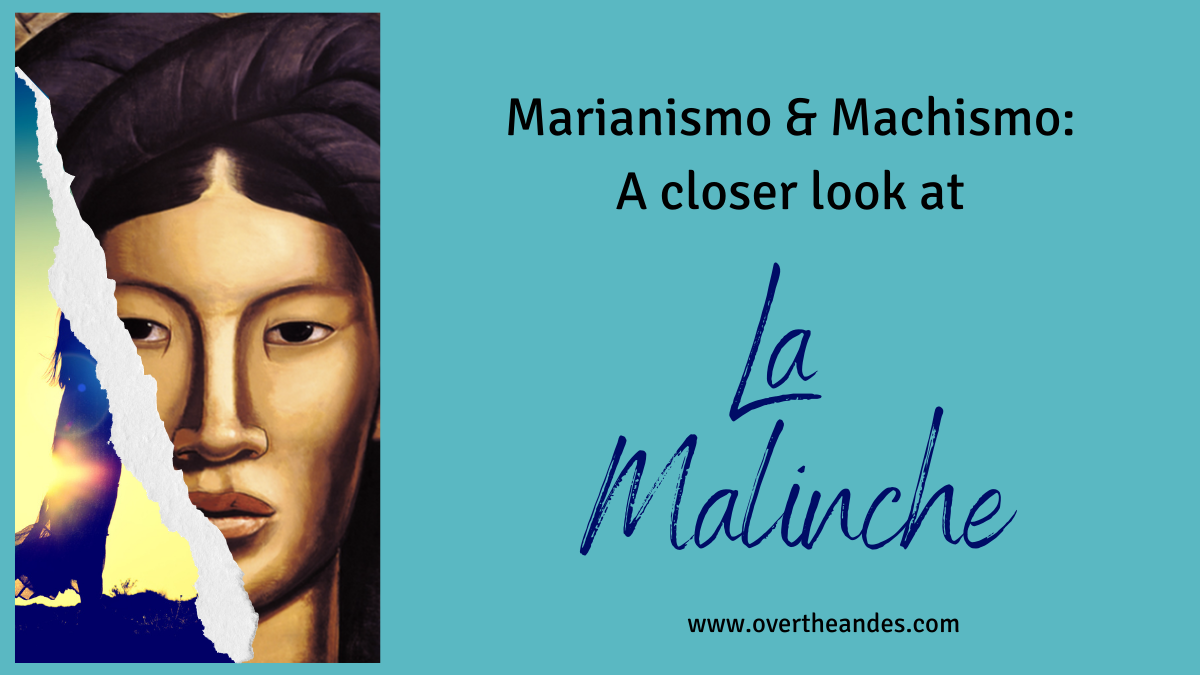 In Part 1 of this topic, we defined and compared Machismo and Marianismo.  In Part 2 we discussed the history and symbolism of La Virgen de Guadalupe.  In this third and final segment we will explore the second archetype against which women are judged: La Malinche.

Who was La Malinche?

La Malinche (or Malinalli or Malintzin as she would have called in her native tongue) was born in Painalla, Mexico, the borderlands between the Aztec-ruled ruled Valley of Mexico and the Maya states of the Yucatán Peninsula.  Her lifetime is estimated to be around 1501-1550.  She was named after the Goddess of Grass, and later called Tenepal meaning “one who speaks with liveliness.”  This was probably a testament to her abilities with languages.  She renounced her indigenous name upon her conversion to Christianity and became Doña Marina.

Her father was the cacique of Painalla but died when she was very young.  Her mother remarried another cacique, and bore a son. To prevent her from endangering the inheritance of her stepfather’s children, her mother faked her death and either sold or gave her away.  Malinche eventually ended up being a slave girl in Tabasco.  The Tabascans later offered up Malinche, along with 19 other slave girls, to Hernán Cortés and his conquerors.

Malinche would, for Cortés and the Spaniards, be an indispensable tool in the battle for the New World.  Her knowledge of the Nahuatl and Mayan languages (among others) coupled with Jerónimo de Aguilar’s knowledge of Mayan and Spanish, led to a successful invasion of Aztec territory.Â  Malinche’s gift for languages and eventual idolatry love for Cortés enabled her to become fluent in Spanish.  To Cortés she became companion, interpreter, adviser, mistress and nurse.  He was already married to a Spanish woman so she would never be his wife.

Cast away as a slave by her people, she stood loyally by the Spaniards.  She bore Cortés a son, Martín, and later married one of his soldiers, Juan de Jaramillo, with whom she journeyed to Spain, where she was warmly received at the Spanish court.  She had a daughter by her husband.

Why is La Malinche viewed in a negative light?

La Malinche is seen as a traitor to her people.  She sided with the gods of the Europeans and rejected the gods of her heritage.  Far worse than that, she colluded with the pale skinned foreigners against those of her own blood.  In one case, (in Cholula) she pretended to befriend a native cacique by claiming to be mistreated by the Spaniards.  Believing her, the cacique’s wife gave her details of the planned conspiracy against the Spaniards.  Malinche relayed this information to Cortés who then orchestrated the meeting and murder of all the local chiefs and nobles.  Using Malinche as his interpreter, Cortés accused them of treason before ordering his attack.  In this way, he taught the natives a cruel lesson.  Do not try to cross the Spanish.  Surviving indigenous codices frequently depict Cortés and Malinche together or Malinche as a central figure herself.

The term malinchista refers to a disloyal countryperson, especially in Mexico, or someone who adopts foreign ways.

As a woman of low morality:

Malinche is a sexualized figure.  Historical research finds only two men with whom she had sexual relations, Cortés and her husband Juan de Jaramillo.  Even in the codices she is presented in conventional Nahuatl wear and does not appear to be overly sexualized. Yet she is.

War and conquest is the male domain.  The undeniable and integral presence of the female La Malinche is therefore difficult to explain according to both indigenous and European mindsets of the time.  Hence she is seen as subversive and labeled as deviant.  She is seen as a ‘bad’ woman.  Once she is identified as ‘bad’, other negative female associations are attached.  She is vilified because there was no way else to characterise this woman who was far too out-spoken and self-motivated for her time.  Historical accounts of her were written by men limited by the customs and beliefs of their time.

La Malinche is seen as a violated woman (la chingada) but also as a willing victim of European hegemony.  She bore a son, Martín, as a product of a sexual relationship with a married man who was not her husband.  Neither was he of her race.  She rejected moral and cultural norms.  She allowed a white man into her body, symbolizing his dominion of indigenous Mexico.

Malinche is therefore unfairly contrasted against the good and pure Virgen de Guadalupe and Cuauhtemoc, the last Aztec emperor who fearlessly resisted European domination until his end.  She could never come out on the winning end of such comparisons.

Why La Malinche should be viewed in a positive light

It is important to remember of Malinche that she was not Aztec.  The Aztecs had themselves subjugated and oppressed neighbouring tribes. Non-Aztecs, lived in fear of the mighty empire.  Malinche worked with some of those tribes, alongside the Spanish, against the Aztecs.  She perhaps believed her efforts to be helping those who had been victims of the ruling empire in Mexico.  Whatever the truth of that issue may be, Malinche’s skills as a gifted communicator allowed her to negotiate ways to prevent the Spanish from making their conquest of the Americas even more violent than it was.

Modern Mexican and Mexican-American literature tries to reinvent the image of Malinche. Through this lens she is not a traitor to her people but a liberator freeing her people from Aztec oppression.  Within this context, Malinche’s role as military adviser is given more prominence than her role as companion and translator.  The work of Rosario Castellanos (Mexican scholar and feminist writer) defended Malinche as a woman caught between cultures, forced to make complex decisions, who ultimately served as the mother of a new race.

Through Cortés and Malinche, some see an allegory for modern Mexico: the offspring of violent Spanish domination and native collaboration.  Malinche is viewed as the mother of the new Mexico, the mother of the Mestizo, through the creation of her half-European/ half-indigenous off-spring.  This is a significant title bestowed in a nation proud of its Mestizo heritage.

The son of Malinche and Cortés, Martín, was sent to live in Spain.  He was eventually made legitimate by a papal decree.

The Paradox of La Malinche

By being handed over to Cortés as part of the tribute paid by the Tabascans to avoid a Spanish military campaign, Malinche is cast as a sexual victim of violence and war.  Yet she does not remain subjugated and rises up as a military victimizer in her own right.  She is understood in various and often conflicting manifestations: as the embodiment of treachery or the archetypal victim, or simply as symbolic mother of the new Mexican people.

She is a scapegoat.  By placing upon her the titles of traitor and betrayer, society finds a way to forgive the indigenous men who sided with the Spaniards and took up arms against the Aztecs, fellow indigenous.  Betrayal is tied to the woman.  It is the woman who is weak and can be led astray.  She must be protected by a strong man, el machista.

The virgin or the whore?  Between these two archetypes Latinas will struggle.  They must be the perfect woman as portrayed by La Virgen.  If they fail to achieve that, they will be cast out as the bad, the deviant, La Malinche.  What then of the woman who may struggle for perfection but falls short? Breaking free of these constructs and forging a new feminine identity is the battle of the modern marianista.