Fidel CastroÂ forms the “26th of July Movement“, the Cuban revolutionary organization that would dominate the face of Cuban history for more than half a century.

July 26, 1953 was the date on which a small group of revolutionaries, led by Fidel Castro, attacked the military Moncada Barracks in Santiago de Cuba.Â  The rebels would ultimately be unable to take control of the barracks.Â  They were severely outnumbered by soldiers loyal to ruling leader Fulgencio Batista and many of them were killed.Â  On the government’s side, fifteen soldiers and three policemen were also killed.Â  Castro and his captured comrades were arrested and later faced trial for the insurrection.Â  Fidel and other leaders of the attack were sentenced to several years in prison.

Despite, the capture and arrest of the rebels (and execution of other participants) the July 26 attack on the Moncada Barracks is regarded as the beginning of the Cuban Revolution.Â  For that reasonÂ 26 July, was adopted by Castro as the name for hisÂ revolutionary movementÂ (Movimiento 26 JulioÂ orÂ M 26-7).Â  The July 26 Movement would eventually overthrow the dictatorship ofÂ Fulgencio BatistaÂ on 12 January 1959. 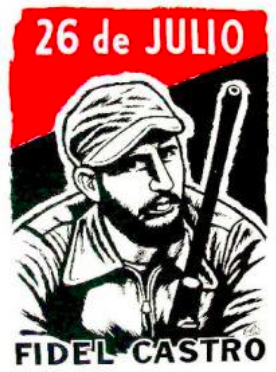