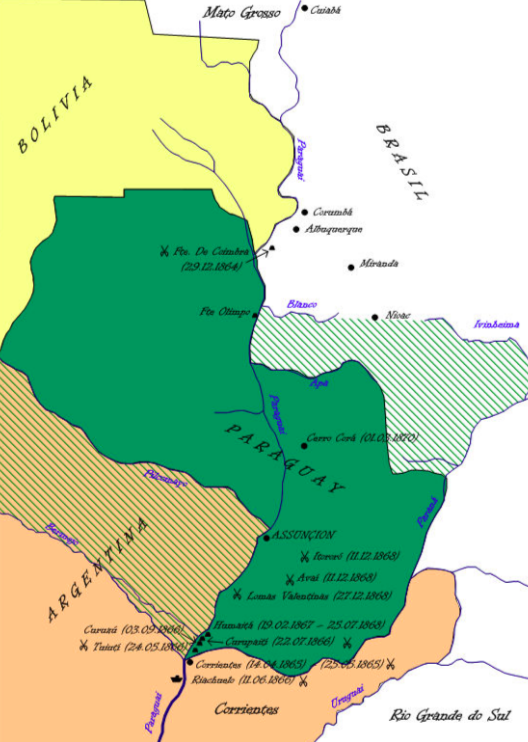 History is rife with wars and struggles and Latin American history significantly so.Â  A couple weeks ago we covered the story of Mexican independence.Â  In the year 1821, several Latin American countries gained their independence from Spain.Â  That, however, was just one more step in their stories.Â  After achieving independence most of Latin America would go through a period of regionalism and consolidation.Â  Geographic and economic constraints meant that societies were quite insular and region was given prominence over nation.Â  Where nation was considered, unity amongst citizens was achieved by uniting against a common enemy.Â  Â Border conflicts and wars were common.Â  The Great Paraguayan War is one such example.

The Importance of River Access: How Geopolitics Provoked the War of the Triple Alliance

The rise and fall of Paraguay is most closely linked to its geographical location. It was the only landlocked nation in South America, until Bolivia became so at the end of the 19th century. Paraguay is bordered by Brazil, Argentina and Bolivia, and was always fearful of invasion by the more powerful Brazil and Argentina. Â Both of these countries had been reluctant to recognise Paraguay’s independence as both had territorial claims against the nation.Â  Brazil and Paraguay continually fell into a dispute over whether it was Rio Apa or the Rio Branco which formed the border between the two countries.

See Paraguay (coloured in Peach) and surrounded by Bolivia, Brazil and Argentina.Â  Note the locations of Rio Apa and Rio Branco. (Other sources cite this river as Rio Blanco)

In 1850 when Brazil established two new posts in the controversial area, between the two rivers, Carlos Antonio LÃ³pez (then leader of Paraguay) sent forces to successfully disperse them.Â  Brazil gave in but was clearly displeased to do so.Â  Argentina’s dispute with Paraguay was of a slightly different in nature.Â  Let’s go back a few more years…

After the overthrow of the Spanish crown, as the capital of the former viceroyalty of La Plata, Buenos Aires Argentina saw itself as the rightful heir of the entire region and believed that â€œParaguay should in the natural order of affairs form an integral portion of the Argentine confederation.â€ (1) As a result of this desire to re-integrate Paraguay into the Argentine confederation, it would be many years before Argentina would accept Paraguay’s independence. Further controversy existed among these three countries with regard to the navigation of the Paraguay-Parana River system. Brazil wanted access from the province of Mato Grosso to the Parana River and ultimately the Atlantic Ocean, via the Paraguay River, and Paraguay wanted Argentina to give it access to the Atlantic via the Parana River.

The Paraguay River bisects Paraguay and joins the Parana River, which flows out into the Atlantic Sea, and which joins Paraguay to the former La Plata states.Â  Paraguay was the most upriver province of the former vice royalty of La Plata (Argentina), and therefore was very dependent upon the Parana waterway for its import-export trade.

Paraguayans were the most disadvantaged along the waterway because all the other ports along the river charged duties on goods passing through. By the time the Paraguayan exports arrived in Buenos Aires they were very expensive, as were imports arriving in Paraguay.Â  Although this would seem to be a highly inequitable situation for the Paraguayans, it must be remembered that the colonial system was based on large, private haciendas run by servile labour and peonage.Â  The results of this exploiting of labour was that the dominant elite of Paraguay were relatively undisturbed by the steep tariffs incurred upon the country’s imports and exports.Â  They therefore did nothing to change Paraguay’s economy which, like that of most of Latin America, was dependent on only one or two major exports; yerba matÃ© in the case of Paraguay.

Enter now Dr. JosÃ© Gaspar Rodriguez de Francia, the leader of Paraguay from 1814 until his death in 1840.Â  He was a member of the Revolutionary Junta that demanded Paraguayan Independence.Â  The junta found it unfair that Paraguay had to pay such high tariffs on their goods because of their location, and would often ask to be allowed to spend some of the impost duty on aid for its defensive campaigns against the indigenous.Â  They went on to say that they were â€œonly claiming a part of what was its own, for its was not just that the other cities should be supported by the impost on Paraguay.â€ (2)

It was Francia who ensured that after the departure of Spain, Paraguay did not find itself subservient to Buenos Aires. When he came into power in 1816, his goal was to make Paraguay economically and politically independent, but he knew that both were connected.Â  Francia knew that if he were to change the colonial economy of Paraguay, he would have to destroy the power of the elites.

When the PorteÃ±os of Buenos Aires decided to economically strangle Paraguay by blocking Paraguay’s ships from navigating the La Plata section of the Parana River, Francia reacted by quickly reorganising the Paraguayan economy. He declared that church lands would be state land and broke up large haciendas into smaller units, ensuring that all the land was distributed to families to be used as family farms. All agricultural and pastoral systems had to be diversified, and so the farmers of Paraguay grew yerba matÃ©, sugar, cotton, vegetables, wheat and rice.Â  They also raised cattle. Paraguay was now astonishingly self-sufficient as Paraguayans could use local material for clothes and shoes, and so they were able to feed and clothe themselves with no need for imported manufactured goods.

Francia created a hermit, state run economy for his country as Paraguay became more and more isolated from the rest of Latin America, and the world in general. Francia decided on a new free trade policy. He insisted on a barter system whereby Paraguayan goods were exchanged directly for necessary foreign goods, and he decided how much of the foreign good was equivalent to how much of a local product. Of special importance to Francia were guns for the military defence of his newly independent nation. Francia refused all foreign loans. Therefore Paraguay never found itself immersed in foreign debt, unlike so many other Latin American states.Â  He also refused foreign investment, as he was well aware that the initial capital brought into the country would be far less than what would later be taken out. The economy was state-dominated.

Francia exercised a system of democratic centralism in Paraguay as there were elements of both Democratic and dictatorship systems. He held supreme power over a decentralized Paraguay but municipal councils supervised the every day management of the various regions. By the time of Francia’s death in 1840, Paraguay was a self-sufficient nation which could run its own internal affairs. Paraguayans owed nothing and had enjoyed a prolonged period of peace during their first years of independence. Paraguay was on the verge of taking off, and was perhaps well on its way to becoming a significant power in south America. This made them a nation to be envied and feared by the rest of the continent.

During the time prior to Francia’s death, Paraguay could not trade with Buenos Aires because of the embargo designed to strangle the Paraguayan economy. Therefore, Paraguay entered into a limited trade agreement with Brazil and would later, under the leadership of Carlos Antonio Lopez, form a military alliance with Brazil to counterbalance Argentina’s power. This alliance would last until 1852.

Paraguay was always wary of an Argentina under Juan Manuel Rosas because he refused to recognise the nation’s independence from La Plata.Â  In 1844, in an attempt to counter Argentine pretensions for the unification of the entire La Plata region, Brazil recognised Paraguay’s independence. The Brazilians wanted to check the growth of this increasingly powerful neighbour (Argentina), and so Paraguay was an useful ally against Rosas.

Brazil went on to exercise a significant amount of control over the land locked nation. As long as Lopez needed Brazilian help, there was little he could do to curb Brazilian influence. In 1850, as part of a defence plan, Brazilian ships were allowed free navigation along the Paraguay River. In return for this, Lopez wanted Brazil to sign a treaty clearly demarcating the boundaries between the two countries.Â  Brazil refused by continually deferring the issue, and there was nothing Lopez could do. All this changed, however, in 1852…

Check in here again next week for Part 2 to find out what happened next!