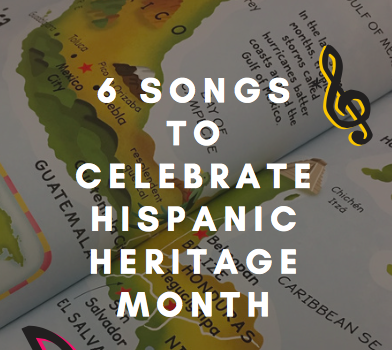 Hola mis amigos.Â  Es viernes de nuevo.Â  I hope you have wonderful plans or at least relaxing plans for your weekend.

Welcome back to my Friday CanciÃ³n feature.Â  Today I’m doing something a little bit different and featuring a few songs by different Hispanic artists, as part of the month long Hispanic Heritage Month celebrations.Â  I started going through some of my old CDs from when I was a university student, looking for my favourites from back then.Â  I discovered that I have several CDs but no working CD player at home.Â  Lol.Â  Thank goodness for YouTube to pull up the tracks!Â  I also found two more recent releases.Â  I hope you enjoy the selection.

I know this song from a CD I found while pottering around a second hand bookshop in London.Â  It was one of my favourite places to stop off on my way home from classes.Â  Our Cuba was compiled and released by Charly Licensing in 2002.

The next one on my list is Amame Hasta Que Me Muera by Spanish rock band ManÃ¡. This song is from their 1997 album SueÃ±os Liquidos.Â  Thanks to some lovely work colleagues years ago who gifted me this CD.

Song number 3 is from Selena, the Chicana artist who was tragically taken away at a very young age.Â  Her legacy lives on through her music and her fame as one of the early successful crossover artists.Â  In 1999 her All My Hits/ Todos Mis Exitos CD was released.Â  I found it to be a great stress reliever while preparing for A level exams.Â  I have several favourites on that CD but I’ll add Bidi Bidi Bom Bom to today’s list.

No list of my favourites would be complete without a song by Marc Anthony.Â  His 2001 salsa album, Libre was another gift, but from one of my aunts this time.Â  Again, I have several favourites but I’m going with Este Loco Que te Mira.Â  Take a listen, I’m sure you’ll recognise it.

Eme Alfonso is a very talented artist I recently discovered.Â  In El Bote, Afrocuban percussions combine with jazz to create a hauntingly beautiful melody.Â  El Bote was released only this year but I look forward to discovering more music from this very talented artist.

The last one for today is from another band I just discovered, Hip Spanic All Stars.Â  This band unitesÂ Spanish Caribbean salsa and Latin jazz with rock and African American soul and funk…. really! The group called their debut album “JazzyAfroLatinFunk”.Â  The music is playful, eclectic and perfect for a Friday CanciÃ³n.Â  Their song Radio Conga is an instrumental which perfectly illustrates this.Â  Unfortunately, I couldn’t find a ‘shareable’ version.Â  I’ve included Funky Cha Cha Cha instead. I’m sure this one will get you moving!

That’s it for today.Â  I hope at least one of these songs brings a smile to your face and some pep to your step.Â  Have a lovely weekend.