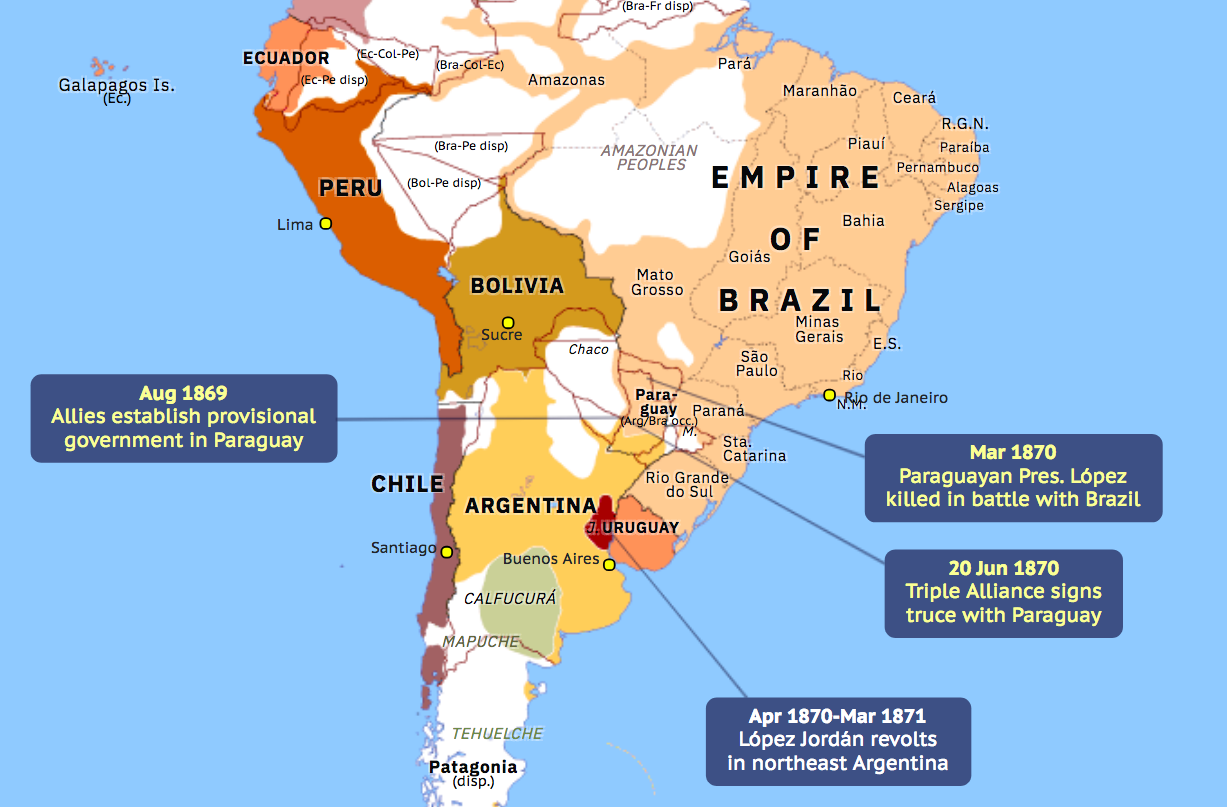 The Importance of River Access: How Geopolitics Provoked the War of the Triple Alliance

Last week we started our exploration of the Paraguayan War and how river access was of vital importance to the landlocked nation.

Remember, in 1850, Brazilian ships were granted free navigation along the Paraguay River.Â  In exchange, Paraguay wanted Brazil to finalise the borders between the two countries.Â  Brazil would not commit to the treaty, and there was nothing Paraguay (under control ofÂ Carlos Antonio LÃ³pez) could do. All this changed, however, in 1852â€¦

In 1852, a joint force of Brazil, the Liberal Party of Uruguay and the La Plata province of a Entre Rios, headed buy the caudillo leader of Entre Rios, Justo JosÃ© Urquiza, embarked upon a successful mission to overthrowÂ Juan Manuel Rosas, the tyrant leader of Argentina.Â  Paraguay had been asked to join the attack against Rosas, but soon backed out and decided to maintain a position of neutrality.Â  This move met with Brazilian indignation, and leads to the supposition that had Paraguay been more cooperative with Brazil in this endeavour, maybe the War of the Triple Alliance may not have taken place. 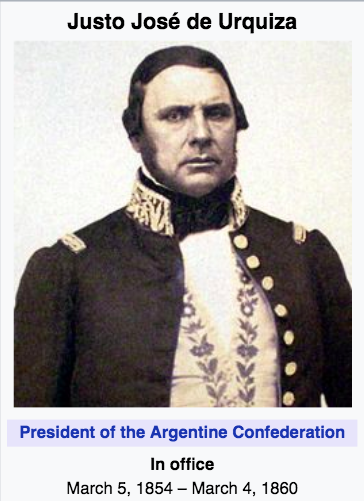 Following the removal of Rosas from Argentina, Urquiza recognised Paraguay’s independence, as did Great Britain, the United States, France and Prussia. LÃ³pez was no longer compelled to depend on Brazil for protection from Argentina.Â  It would seem Paraguay had made a good choice.

However, at the same time, Brazil having now established itself as the dominant influence in the Parana River area,Â  because Argentina was then in the middle of civil unrest, probably felt that friendship with Paraguay was no longer as important as it was before the eviction of Rosas. It ought to be noted that in exchange for the recognition of its independence, Paraguay had to concede a vital piece of land known as Misiones to Argentina.Â  This was a strategic piece of land because it was located between the rivers Parana and Uruguay, and Paraguayan control of this land made it easy to rush troops to Uruguay.Â  That had been an important advantage for Paraguay because of the ongoing liberal-conservative struggles in Uruguay, and because both Brazil and Argentina wanted to lay claim to the former Banda Oriental (Uruguay).

Paraguay was under not only territorial pressures, but also economic pressure from the likes of Britain, who had always been opposed to Paraguay’s policy of no free-trade. When Britain finally decided to recognise Paraguay’s independence in 1852, LÃ³pez was required to sign a short-term commercial treaty with the European power. The treaty expired in 1858 and Paraguay refused to renew it. This is led to some high-handed actions on the part of the British.

Carlos LÃ³pez’s son, Francisco Solano LÃ³pez, had gone to London to fetch a newly acquired warship.Â  With peace between Buenos Aires and Paraguay, Francisco LÃ³pez had intended to sail along the Rio de La Plata (Parana River).Â  He was stopped and held prisoner on board the warship by British Consul, Charles Henderson. Britain was demanding the release of Juan Santiago Constatt, a dual citizen of Paraguay and Britain, who had been arrested for espionage and had had his passport taken away. Britain released Francisco LÃ³pez upon the release, by Paraguay, of Constatt, an apology, an agreement to pay him an indemnity and most importantly, a renewal of the commercial treaty. Such imperious tactics on the part of the British has led to the belief that they were actually a fourth ally of the Triple Alliance, who wanted the opening of the Paraguayan economy.

Francisco Lopez became President of Paraguay in 1862, upon the death of his father.Â  He was far less cautious than his father and overly confident in his country’s military capabilities. Like his father, however, he was very fearful of a joint Argentine-Brazilian attack.Â  In 1863, there were renewed border incursions into the Brazilian territory of Rio Grande do Sul, on the part of Uruguayan bandits. The conservative president of Uruguay Anastasio Cruz Aguirre, refused toÂ  bow to threats of Brazilian invasion, if Brazil was not compensated for their losses, and turned to Francisco LÃ³pez for assistance. LÃ³pez was enchanted by the idea of serving as a mediator to maintain the equilibrium of power in the La Plata region. â€œHe opined that peace and Paraguay’s well-being in the La Plata required a balance of power between Argentina and Brazil, equilibrium which Paraguay had the obligation to force if necessary.â€ (1)

LÃ³pez warned Brazil against invading Uruguay but they openly defied his warning when on October 16, 1864, Brazilian troops invaded Uruguay.Â  This situation was aggravated by Brazil’s continued refusal to sign the border treaties, and their insistence upon crossing into the boundary area between the Apa and Blanco (Branco) rivers.

Map showing the disputed territories between the various belligerents.

Francisco LÃ³pez retaliated by attacking Brazilian ships passing through the Paraguay River. Matters came to a height when LÃ³pez stopped the Brazilian steamer, Marquez de Olinda, with the president of Mato Grosso on board.

Despite the open hostilities between Argentina and Brazil; and Paraguay and Brazil, the Paraguayan War was heralded by an event in the long running civil war, in Uruguay, between the conservative Blanco party and the liberal Colorado partyâ€“ the rebellion of the Colorados to overthrow the Blanco Government.

Argentina threw their support behind the Colorados for two reasons. The first was that these same liberals had helped BartolomÃ© Mitre (now leader of Argentina) to get into power during the Argentine civil war. The second reason was that Mitre saw Paraguay and the Conservative Blanco party as a source of opposition to the federal system of the Argentine Republic. Brazil supported the Colorados in an attempt to protect their own interests in Uruguay, as the liberal government was much more lenient towards Brazilian interests.Â  By this time Brazilians accounted for more than 10% of the population of Uruguay and owned about 30% of the land.Â  The Blanco government, elected in 1860, had begun to seriously restrict this Brazilian incursion, so carelessly enjoyed under the Liberal regime.

This was a time in Latin American history when Liberals and Conservatives would rather side with those who shared their political values across borders rather than with their countrymen of opposing beliefs.Â  Therefore, conflict with Paraguay (which was more Conservative) was increased when the leader of the conservative Blanco government turned to Paraguay for help in 1863.

According to LÃ³pez’s official newspaper, El Seminario, the Brazilian occupation of Uruguay was â€œa threat to the liberty, independence, sovereignty and territorial integrity of the Republic of Paraguay, and of the other states in this part of America.â€Â  It was with this conviction that Francisco Solano LÃ³pez declared war on Brazil on December 13, 1864 and proceeded to invade Mato Grosso, Brazil.

His main objectives, however, was to unite his army with Aguirre’s in Uruguay, but to do so required crossing the now Argentine province of Misiones.Â  When Lopez asked for permission to cross the land, Mitre refused claiming that Argentina was taking a neutral stand in the war between Brazil and Paraguay.Â  To Argentina’s utter amazement, LÃ³pez took his troops and boldly invaded Misiones, thereby declaring war upon Argentina as well. Here ended all hopes of Argentine neutrality and they signed a treaty with Brazil, consolidating the Triple Alliance of Brazil, Argentina and the Colorado government of Uruguay.

The War of the Triple Alliance was to last five long, bloody years. The Paraguayans fought bravely in a long, hard battle against insurmountable odds. They surrendered only upon the death of Francisco Solano LÃ³pez. No one had expected the war to last so long, but the Paraguayans believed they were fighting for their very existence, and thus their admirable patriotism was revealed. The war came to an end in 1870. Paraguay had been destroyed and the following years would see a complete reversal of the strong self-sufficient economy Francia and Carlos LÃ³pez had worked so hard to create.

Perhaps this horrific war could have been avoided if Brazil had not been so quick to invade Uruguay in defence of its local interests. Maybe if Argentina had remained neutral, the war would not have taken such a destructive turn for Paraguay. However, Paraguay should have recognised the reality of the powerful nation against whom it rushed into war.

One of the aims of the Triple Alliance (as revealed by Britain in 1866) was the dismemberment of Paraguay and the guarantee of free navigation on the Paraguay/ ParanÃ¡ Rivers.Â  Such an aim can singly support the view that the War of the Triple Alliance was provoked by geopolitics. Argentina wanted Paraguay to be re-integrated into the Argentine Confederation, Brazil wanted free access to the river systems and Paraguay itself wanted access to the Atlantic Ocean via the ParanÃ¡ River. These desires were complicated by boundary disputes and civil strife. Although the Paraguayan War could have been considered avoidable, it was certainly provoked by the geopolitics of river access.