In La Camisa Negra, Juanes is wearing the black shirt to signify mourning.Â  He is mourning the death of his relationship and his love for his significant other. What was delightful yesterday, is now utterly appalling.

But it’s not all depressing, it’s a bit cheeky too, as our lover sits waiting for his lady to return home… simply so that he can send her packing once again.Â  Her suitcases are at the door…

Here are the lyrics /Â letras. 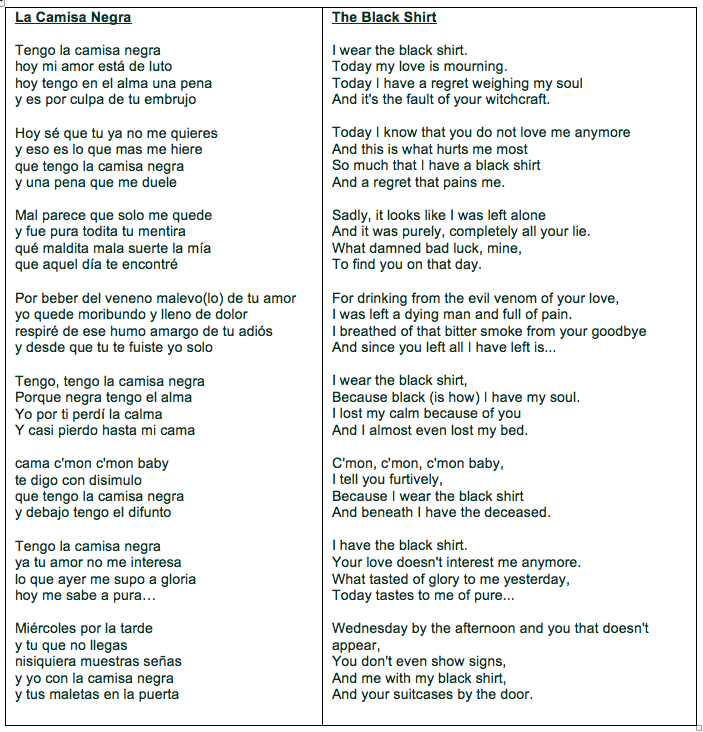 A good website to read about the translation is Songlations.

Here is the song with las letras scrolling as it plays.Â  Try singing along.

An interesting side story to this song…

The Black Shirts were a Fascist group in Italy under Benito Mussolini.Â  When this song was released in 2005, it was unfortunately used in Italy, by some far-right supporters, in support of neo-fascism because of the use of “black shirt”.Â  Juanes has stated that La Camisa Negra has nothing to do with fascism or Mussolini and is simply a love song.Â  The song was still banned in some places because of the association.Â  In the Dominican Republic, it was banned for its ‘sexual innuendo’.

How’s that for some Friday drama?