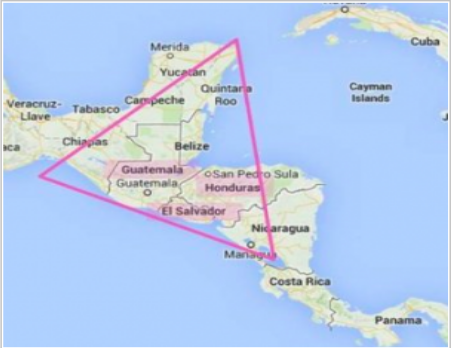 While the vast majority of what I post on Over the Andes focuses on the beauty and positive aspects of a region I adore, there are a few negative aspects that sometimes overshadow that grandeur.Â  I’d like to approach this site in a similar fashion to how I approach my ‘real life’ classes where we look at the good and the bad and often engage in very discerning discussion.Â  With that explained, today’s post will touch on something known as the Northern Triangle of Central America and the violence associated with this region.

What is the Northern Triangle?

The Central American nations of El Salvador, Guatemala and Honduras make up what is known as the Northern Triangle.Â  These countries (Honduras more by spill-over effects from neighbouring countries) were each devastated by civil wars in the 1980s and the legacy of violence, unstable infrastructure and fragile institutions remains.Â  The civil wars in these countries were triggered by the centuries old aggravation of concentrated land ownership, the resultant severe income inequality, repression of the indigenous and foreign interventions spurred by Cold War vendettas.

History aside, for now, these three countries today suffer from high levels of institutional corruption, drug trafficking, gang violence and low levels of tax revenue (which could potentially assist in infrastructure development).Â  The Mara street gangs, Central American drug transporters, and Mexican drug cartels have all contributed to record levels of murder and violent crime in the region.Â  Many sources confirm that in 2011, the Honduran homicide rate stood at 86 per 100,000 inhabitants.Â  The country was dubbed the “murder capital of the world”.Â  In fact, Honduras had the highest homicide rate of any country not at war.Â  Its manufacturing and commercial hub ofÂ San Pedro Sula suffered a 2012-13 murder rate of 173 per 100,000, reportedly the highest for any city outside a war zone.Â  In 2015, Â El Salvador became theÂ world’s most violent country, not at war, when gang-related violence brought its homicide rate to 103 per hundred thousand.Â  In 2016, El Salvador and Honduras remained amongÂ the five countries with the highest rates of violent death in the world.

So what accounts for this relatively recent and dramatic upsurge in violence?

The street gangs arrived in El Salvador in the mid-1990s, after the United States repatriated hundreds of Salvadorans from Californian prisons.Â  The prisoners returned to their homeland but their less than illustrious connections with North American gang leaders and drug networks remained.Â  This resulted in the creation of extortion networks and the beginning of turf wars in Central America.Â  Between 2001 and 2010 an additional 120,000 prisoners were returned.Â  Today, the Mara SalvatruchaÂ (MS-13) and the Eighteenth Street Gang (M-18) areÂ the region’s largest gangs and are estimated to have over 80,000 members.

Also in the early 2000s, the overland Central American terrain became a key drug-trafficking route for producers in South America who were determined to meet the demand for narcotics in North America.Â  By 2012, 80% of cocaine destined for the United States passed through the Northern Triangle; some estimates put that number at 90% today.Â  This was a massive increase from even just three years earlier.Â  Much of the product arrived on the Mosquito Coast of Honduras, going up the northern coast and through San Pedro Sula.

The murder rate is one issue, extortion is another.Â  In 2015, Honduran media outlet, La Prensa, ran a report to determine rates of extortion in the Northern Triangle.Â  The numbers are mind boggling.

The amount is probably even higher, as the printed figures could only reflect reported incidences.

In the Honduran capital, Tegucigalpa, the city’s Chamber of Commerce reported that in the two years prior to 2015, 18,000 businesses were forced to close as a result of the “guerra impuesto” (war tax).Â  In El Salvador, it is calculated that up to 10 businesses close each week because of this undue burden.Â  This situation is of course linked not just to street gangs but also to money laundering and highly organised international crime syndicates.Â  Â However, the daily burden is felt by the average citizens.Â  Small businesses and residents of poor neighbourhoods are often the victims.Â  Those who do not pay are attacked.

In an article written by Michelle Centeno for UNICEF, the struggles of one Salvadoran family in the face of these horrific challenges is revealed. 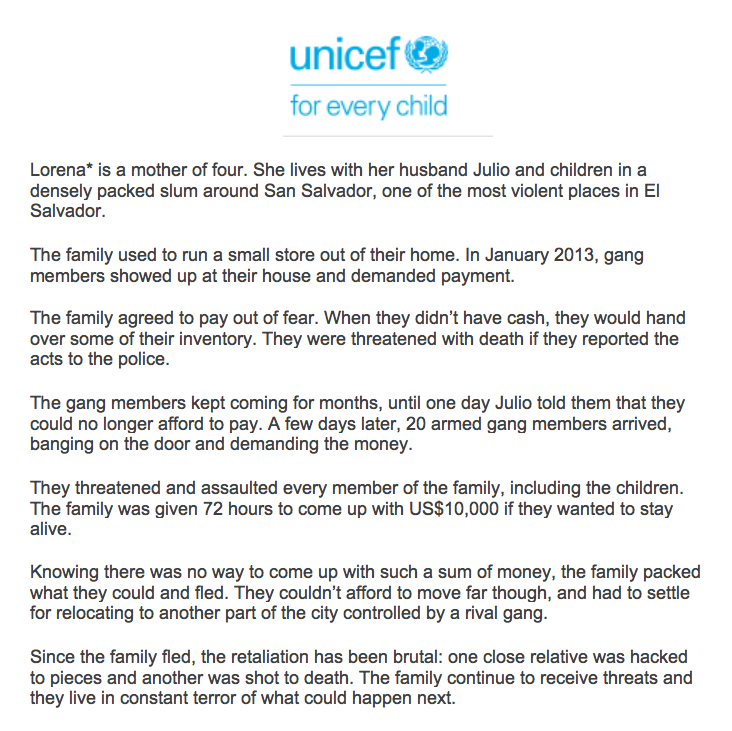 Facing violence or violent behaviour on a daily basis has resulted in tens of thousands of children dropping out of school and hundreds of thousands of people being forced out of their homes.Â  According to the report Vizibilizar Lo InvisibleÂ by Salvadoran human rights organization Cristosal, at least 273,000 people had been displaced by 2017 in El Salvador alone.Â  This is only an approximated number and estimates are even higher.Â  A percentage of these internally displaced persons will ultimately seek refuge further north.

For this reason, El Salvador and Honduras in particular must recognise and accept that there is a real problem of forced displacement in those countries.Â  Once this is accepted, it may be possible to put in place policies and systems to prevent forced displacement.Â  Where displacement has already occurred, plans and services are needed to help these persons stay in their homeland rather than flee their countries out of fear.

A Marshall Plan for Central America?

President Lopez Obrador of Mexico has been advocating for measures to address the root causes of this migration.Â  Â In December 2018, he indicated that his country is willing to invest tens of millions of dollars (billions if possible) in the Northern Triangle to try to address the factors that are pushing migrants through Mexico and toward the U.S.Â  The U.S. government has also expressed interest in this plan to stem migration through job creation and development programs in Mexico and Central America; and has pledged $5 billion.Â  Ultimately, the goal is to raise as much as $30 billion dollars through public and private funding for a Marshall Plan of sorts.Â  These funds will assist in securitisation, job development, industry development and other investments in the region.Â  Â It will also assist with the welcoming of migrants into Mexico with visas, health care and employment.Â  Consistent partnership with all stakeholders will be necessary to fully realise this plan.

Light at the end of the tunnel?

The so-called Marshall Plan is hoped to alleviate poverty and maybe even gang violence in the region.Â  However, the governments of Guatemala, Honduras and El Salvador have also been trying to implement policies to improve conditions in their countries.Â  There has been a purging of law enforcement agencies, human rights training, prisoner rehabilitation and reforms to the prison system.Â  Safe houses have also been introduced in certain neighbourhoods.Â  Honduras has made progress in tackling trans-national drug trafficking through an increased posting of soldiers to the Mosquito Coast.Â  El Salvador and Honduras have even levied a security tax on the rich to pay for more law enforcement.

The results are showing, at least a little, through reduced murder rates across all three countries.

It is still early days and many more improvements are to be made.Â  Extortion remains a major challenge as does gang warfare.Â  Violence in the form of attacks, wanton destruction and rape continues unabated.Â  The United Nations estimates that 83 percent of crimes against women in Guatemala go unpunished.Â  Thousands still fear for their lives and some of these persons are willing to take on the myriad of dangers and barriers to search for a better life “up north” for themselves and their families.

If you found this post useful please LIKE or SHARE.Â  To learn more about Spanish Language, Latin American history and culture,Â FOLLOWÂ Over The AndesÂ today viaÂ WordPressÂ or subscribe via email (to the right of the post title).