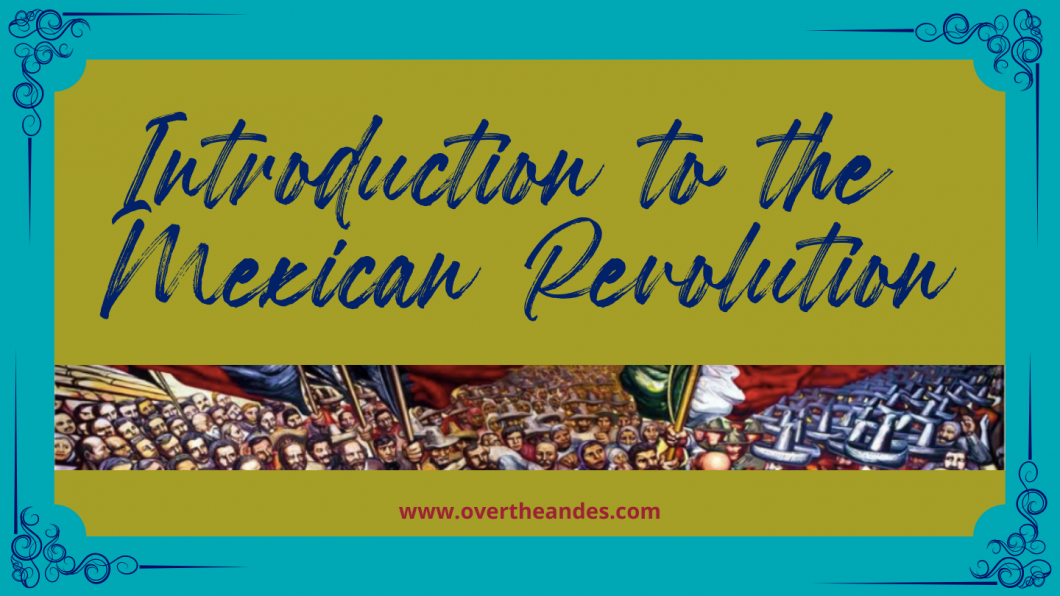 An Introduction to the Mexican Revolution

In 1910, the Mexican economy was still primarily based on agriculture and mining. Society was constructed around a feudal-style system where a handful of wealthy landowners controlled vast estates which accounted for the majority of land. These ‘semi-kingdoms’ were autonomously run and dependent on subservient labour. Peasant workers were usually granted a small parcel of land to cultivate and on which they lived. Produce of the land went back to the landowner with some retained for individual use. In cases where the workers were paid for their labour, it was for as little as 25 cents a day. Items such as meat and ranching supplies had to be bought from the estate shop, where prices were inflated and credit was granted to the peons who could never afford to buy the items outright. Workers thus ended up and impoverished, deeply indebted to the landowner and with barely enough basic necessities to survive. Debts were passed on to children thus creating a system where some were born into near slavery.

Under the stewardship of Porfirio Dí­az, the period of the Porfiriato saw a rapid modernization of Mexico at the turn of the century. Like Liberals across Latin America, his motto for the country was Order, Peace and Progress. Díaz’s advisers, the Cientificos, legislated and oversaw an industrial development that facilitated the construction of ports, roads and factories.  Thousands of miles of train tracks were laid, thanks to British and American investment. The policies implemented during this period opened the floodgates to foreign investors, essentially putting control of Mexico into their hands.  Mexico would be called an ‘economic colony of the United States’. While conditions for some workers (mainly those with factory jobs) improved, the real benefits of modernization went exclusively to the already wealthy and more so to non-Mexicans. Diaz and the Cientificos thought the indigenous to be backwards and were ashamed of their existence. They believed the indigenous impeded development and progress in Mexico and nothing was done to assist them. Thus racism, exploitation and class differences simmered and festered, awaiting a violent eruption.

The Revolution would span almost three decades. Some even argue that it has never really ended.  However, the first ten years remain the most vicious, destructive and deadly.  Hundreds of thousands of people were killed during the many battles and for a variety of causes. Díaz used the railways to send a special branch of the Mexican army, the Rurales, out into the more isolated territories to try to bring those areas back under government control. To prevent this, revolutionaries destroyed miles and miles of rail track. Telegraph lines, oil wells, buildings and factories were all destroyed during the fighting. When stability finally returned, the economy was in ruins and development had been fundamentally set back.

Up until 1934, Mexico saw a string of leaders in and out of the President’s role. Some were dictatorial strongmen and others were mere puppets of other, more astute leaders. The election of Lázaro Cárdenas in 1934, however, gave Mexico a reprieve and a chance to re-group and focus on real development.

The lasting effects of the revolution have been social, political and cultural. Reasonable land reform still must be implemented but there have been strides in the right direction. The Partido Revolucionario Institucional (PRI), the party that was born in the revolution, held onto power for decades, ultimately their reputation would become tarnished. The cultural legacy, however, is perhaps the most profound.

The search for the Mexican identity was expressed via the arts. The Cárdenas government assisted by bringing education to the people through music, literature and art. The great muralists like Diego Rivera and Jose Clemente Orozco came to the fore during this post-revolutionary period. Their murals were splashed over public spaces and depicted the stories of the average Mexican. The artists once again told the stories of the revolutionary heroes Pancho Villa and Emiliano Zapata, whose legacy had been hidden by previous governments. These arts showcased daily Mexican life from the country-sides to the cities; something that was once deemed insignificant was now being honoured. Additionally, the visual and oral depictions were very important in a country where many still could not read and write. The Mexican people (the indigenous and the poor mestizos) saw themselves represented in these art forms for the first time. This brought a new sense of self-worth. They had been despised and looked down upon but now they believed in themselves and felt a new respect unknown to them before.

This article is just a brief introduction to the Mexican Revolution. The story of this Revolution is rich in narrative and lessons.  It has been told innumerable times through, textbooks, novels, poems, movies and documentaries.  It was a time of great upheaval for the Mexican people but it was also a fight for social justice. That fight would be relived across Latin America during the 20th century.

McLynn, Frank. Villa and Zapata: A History of the Mexican Revolution. New York: Carroll and Graf, 2000.