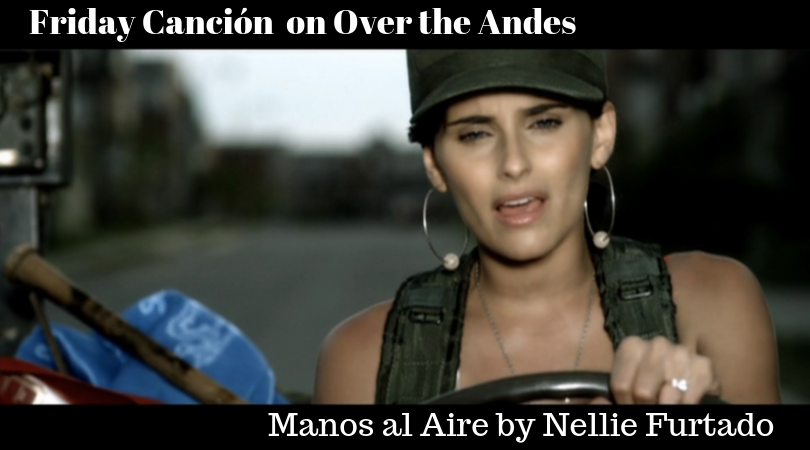 Welcome to today’s Friday Canción.  Today’s song is a more upbeat one, even if it’s about a love gone wrong.  Let’s dive into Manos al Aire by Nelly Furtado.

Nelly Furtado is a Canadian singer and songwriter who is the daughter of Portuguese parents.  Her success in the music industry is evidenced by Grammy wins (both traditional and Latin).  While most of her songs are in English, Manos al Aire is from her debut Spanish album.  It was the first original Spanish song by a North American to become a number one on the Latin Billboard chart.  I liked her hit song, I’m Like a Bird ever since it was released in 2001. I’ve only just come across Manos Al Aire and can now add it to my long list of favourites. The music video for this song was filmed in June 2009 in Toronto and premiered on July 29, 2009.

Here are the letras for you to follow along.

Here’s the song with English subtitles.

Using Manos al Aire as a teaching or learning tool

Other than in verse two, this one isn’t sung too quickly.  The lyrics are clear and the grammar is fairly simple as well, although it makes use of several tenses.  Those characteristics make this a really good listening tool for lower-intermediate students.

Here is an answer key.

There is also an example of imperfect tense and one of the perfect tense.  Can you find them?

On another note: Vivir Mi Vida is another great song for identifying verbs in their infinitive form.

Have a lovely weekend!

For Spanish lessons on Travel, download my FREE e-Book: Spanish Phrasebook for Travel.