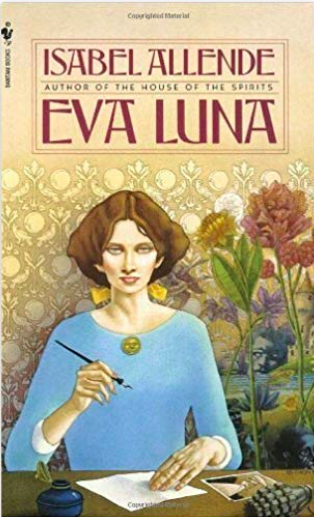 MeetÂ New York TimesÂ bestselling author Isabel Allende’s most enchanting creation, Eva Luna: a lover, a writer, a revolutionary, and above all a storyteller.

Eva Luna is the daughter of a professor’s assistant and a snake-bitten gardenerâ€”born poor, orphaned at an early age, and working as a servant. Eva is a naturally gifted and imaginative storyteller who meets people from all stations and walks of life. Though she has no wealth, she trades her stories like currency with people who are kind to her. In this novel, she shares the story of her own life and introduces readers to a diverse and eccentric cast of characters including the Lebanese Ã©migrÃ© who befriends her and takes her in; her unfortunate godmother, whose brain is addled by rum and who believes in all the Catholic saints and a few of her own invention; a street urchin who grows into a petty criminal and, later, a leader in the guerrilla struggle; a celebrated transsexual entertainer who instructs her in the ways of the adult world; and a young refugee whose flight from postwar Europe will prove crucial to Eva’s fate.

As Eva tells her story, Isabel Allende conjures up a whole complex South American nationâ€”the rich, the poor, the simple, and the sophisticatedâ€”in a novel replete with character and incident, with drama and comedy and history, with battles and passions, rebellions and reunions, a novel that celebrates the power of imagination to create a better world.

Eva Luna is a delightful tale that explores the wonders and diversity of Latin American culture.Â  It takes readers up to the mountain peaks and leaves you breathless as you take in the astonishing views around.Â  The narrative will then plunge your heart down into the valleys and leave you devastated at the unkindness of humanity.Â  Yet, before all is said and done, the majesty of the human spirit is revealed and the strong of heart are rewarded.Â  I spent several days lost in the world created by Isabel Allende and then spent several hours looking up bits and pieces of stories hinted at or described in the book.

The story is set in an unnamed South American country.Â  I had fun trying to work out which country it was most likely to be by piecing together the clues laid in terms of geography, history, climate and political upheavals. Â The history and politics reminded me of events in Argentina, Colombia and Chile.Â  The economy seemed Mexican or Venezuelan.Â  The climate and geography made me think of Venezuela and Brazil.Â  I absolutely loved the mix of elements and histories used to create this particular country.

Eva Luna’s plot line essentially follows Eva’s life.Â  The first couple of chapters focus on Eva’s mother and then Eva and Rolph become the protagonists of the book.Â  There is no main plot, challenge or goal.Â  Rather, the protagonists face a series of obstacles in their life and have to overcome them.Â  The reader, is simply taken along for the ride.Â  We have the chance to experience their pain, triumphs, passions and heartache.Â  The tale is definitely one that plays by the saying, â€œIt’s not the destination, it’s the ride.â€ As a result of this layout, I would even compare the narrative to a collection of short stories as the main characters deal with each challenge.

Another way we experience the ‘short story element’ is through Eva’s own stories. She is a storyteller. That is her gift. She uses oral and later written words to weave fantasies that totally consume her audiences. Her experiences, what she’s read, heard, her imagination and some elements of reality all mesh to create an intricate net that ensnares her audience.

We meet so many different characters along the way. The mamÃ¡, the madrina, the abuela, the papÃ¡, the amante(s) and the friends of the soul who make up for the lack of family of the blood. And we follow the tale of the soul mate who goes through his own life trials which shape him to be the perfect companion to interlock with Eva’s heart. Each character is essentially the star of their own story.Â  Their history moulds them into the ideal person to be in Eva’s life at any given point in time, whether for good or for bad.

A favourite genre or element included in Latin American literature is magical realism.Â  It is a tool used often and well by Allende in her books. Â From the unlikely discovery of Eva’s mother by the missionaries, mentioned on page one, to Eva’s extraordinary conception, to the embalming techniques of the doctor and right up to the â€œuniversal matterâ€ which Eva learns to craft and uses to assist her guerrilla comrades, the extraordinary is woven into the tale, elevating it to a fantastical level while keeping readers grounded in very real and palpable emotion.

I think it’s safe to say I really enjoyed this book and I’m probably going to read Allende’s spin-off, The Stories of Eva Luna.

If you enjoyed this post please LIKE or SHARE.Â  To learn more about Spanish Language, Latin American culture and history,Â FOLLOWÂ Over The AndesÂ today viaÂ WordPressÂ or subscribe via email (to the right of the post title).