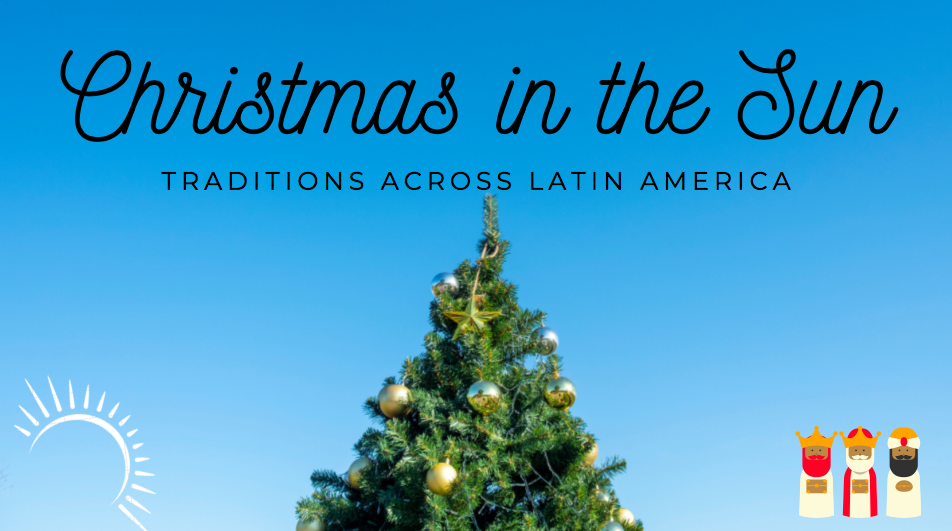 Are you ready for your Christmas celebrations? I’m slowly but surely getting there. Today, I want to share with you some Christmas traditions in Latin America.

I love the charm and crisp beauty of a white Christmas. Songs and poems and even movies pay homage to that imagery, after all. While the sentiments of good cheer and peace to all remain the same, for lots of us not located in the temperate northern hemisphere, our Christmases are markedly different in looks, temperature, meals and music. So, I’ll share with you some Christmas in the sun traditions!

Today, we’ll look at a few Christmas celebrations in Uruguay, Puerto Rico and Cuba; countries where Christmas is celebrated best with family, friends and cool drinks!

Uruguay is the only country in South America that is entirely located in the southern hemisphere’s temperate zone. Christmas, therefore, falls during the Uruguayan summer. Just like their counterparts in the north, Uruguayans love to make good use of the warmer weather to indulge in outdoor markets, days at the beach, picnics in the park and BBQs in backyards. This is one country where spending Christmas Day at the beach is almost completely normal.

In Uruguay, December 25th is a holiday that is officially named DÃ­a de la Familia (Day of the Family). Despite this moniker, in a country that regards itself as one of Latin America’s most secular, most Uruguayans still refer to the day as Christmas Day.

As in other parts of Latin America, the emphasis is placed on the Nochebuena (Christmas Eve) festivities, which usually include large gatherings of family and friends and even larger meals. Christmas Day, therefore, often involves more recuperation! For many families, children’s presents don’t arrive on Christmas Eve, but rather on January 5th and they’re brought by Los Tres Reyes Magos (the three kings) rather than Santa Claus. 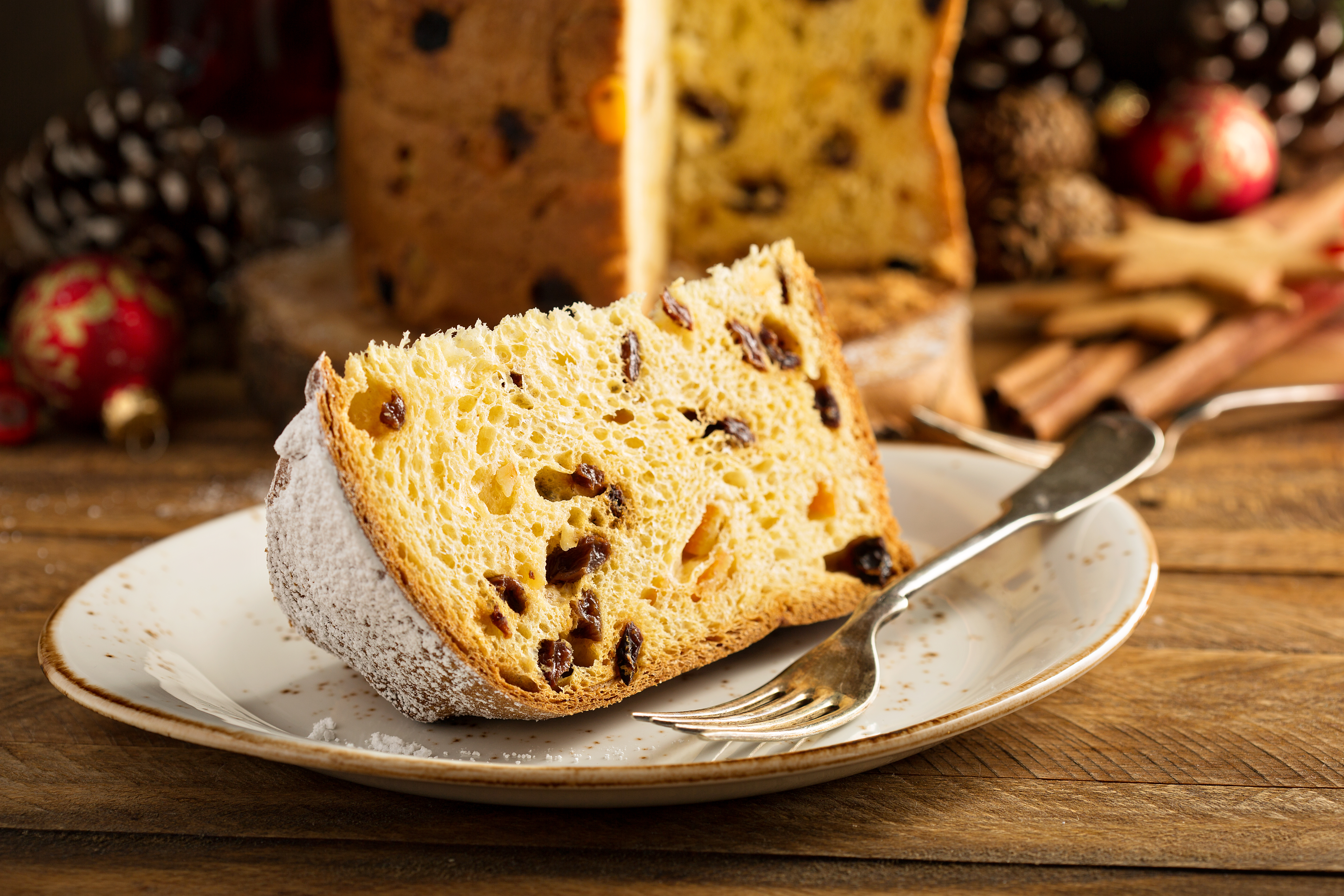 This dish, whose name literally translates to sweet bread, is very similar to the Italian panettone and is extremely popular across South America, particularly at this time of year. This cylindrical bread/ cake is made with dried and candied fruits, fruit peel, honey, roasted nuts and even chocolate in some cases. You’d be hard pressed to find a Christmas celebration in this part of the world that lacks Pan Dulce. 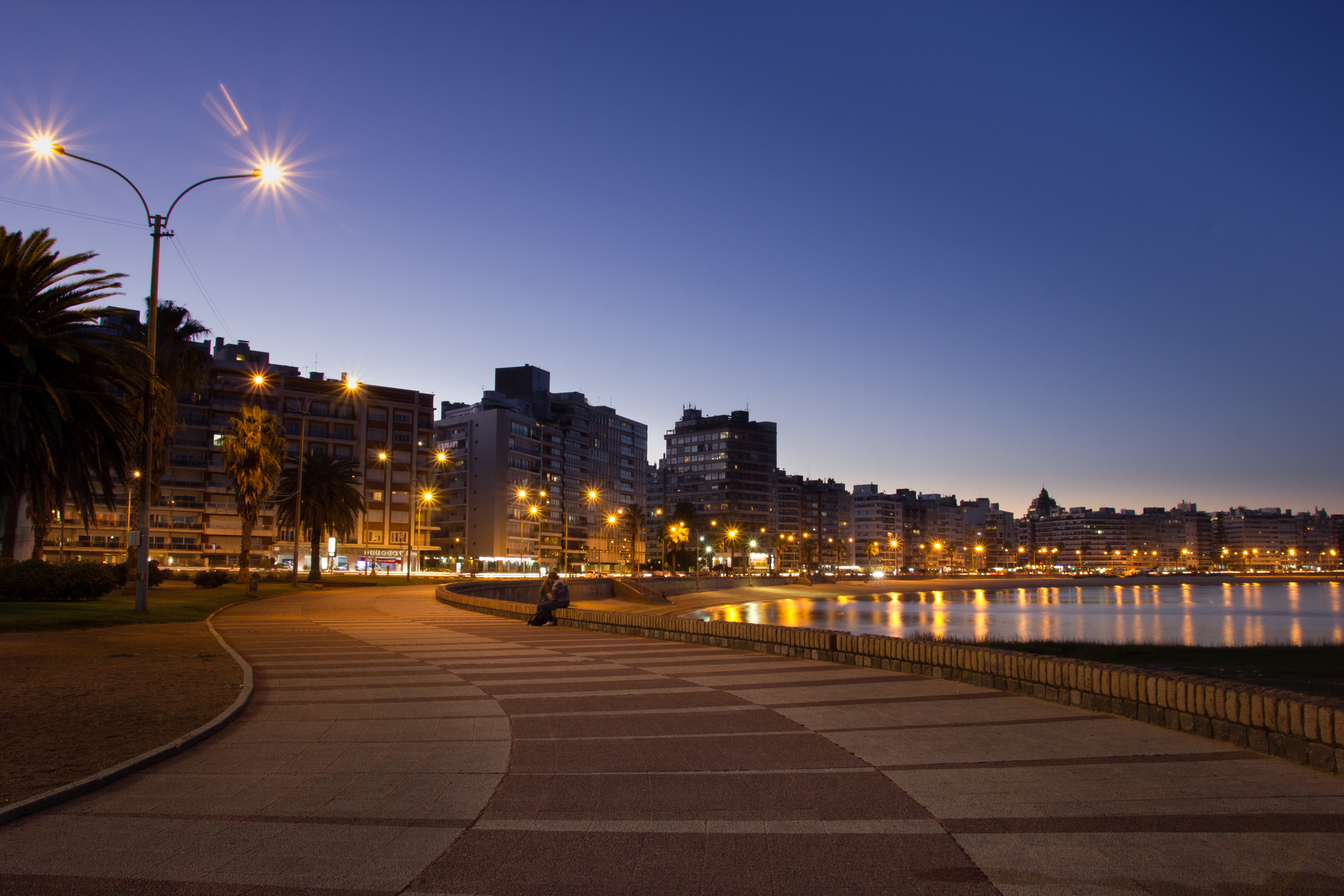 How about spending your Christmas visiting the world’s longest waterfront sidewalk? La Rambla in Montevideo runs a rambling but continuous 22 km and is thought to be the world’s longest- a claim many Uruguayans proudly make! After a lechÃ³n for Christmas Eve dinner, many folks will make their way to La Rambla to enjoy music, dancing and festivities on the shoreline. There’s also a fireworks show to bring in Christmas Day.

If you want to try something completely different from the norm, you may want to check out the Cider Wars in the Mercado del Puerto of Montevideo, to ring in the new year. Hundreds of people of all ages and nationalities gather in the market for the annual occurrence. Gallons of cider and other fizzy drinks such as beer and sodas rain upon merrymakers who dance to the rhythmic beats of samba and candombe. Street vendors set up posts selling bottles of cider for festival goers to throw on one another. Cider for drinking is kept chilled and cider for throwing stays at ambient temperature.

This is possibly the Puerto Rican answer to carolers, but louder, merrier and louder! There are professional parrandero groups who will play at competitions and for events. However, the real deal are those delightful amateur groups that congregate on a friend or neighbour’s doorstep, late in the night, ready to serenade the house occupants with popular aguinaldos (Christmas folk songs). The singers come bearing their guitars, cuatros, tambourines, maracas, palitos, and guiros, among other instruments and, after singing, are invited in for refreshments, more singing and dancing. Then it’s off to the next house, often with the occupants of that current house in tow too. Have a look at Conciertos Latino’s video of a parranda in progress. 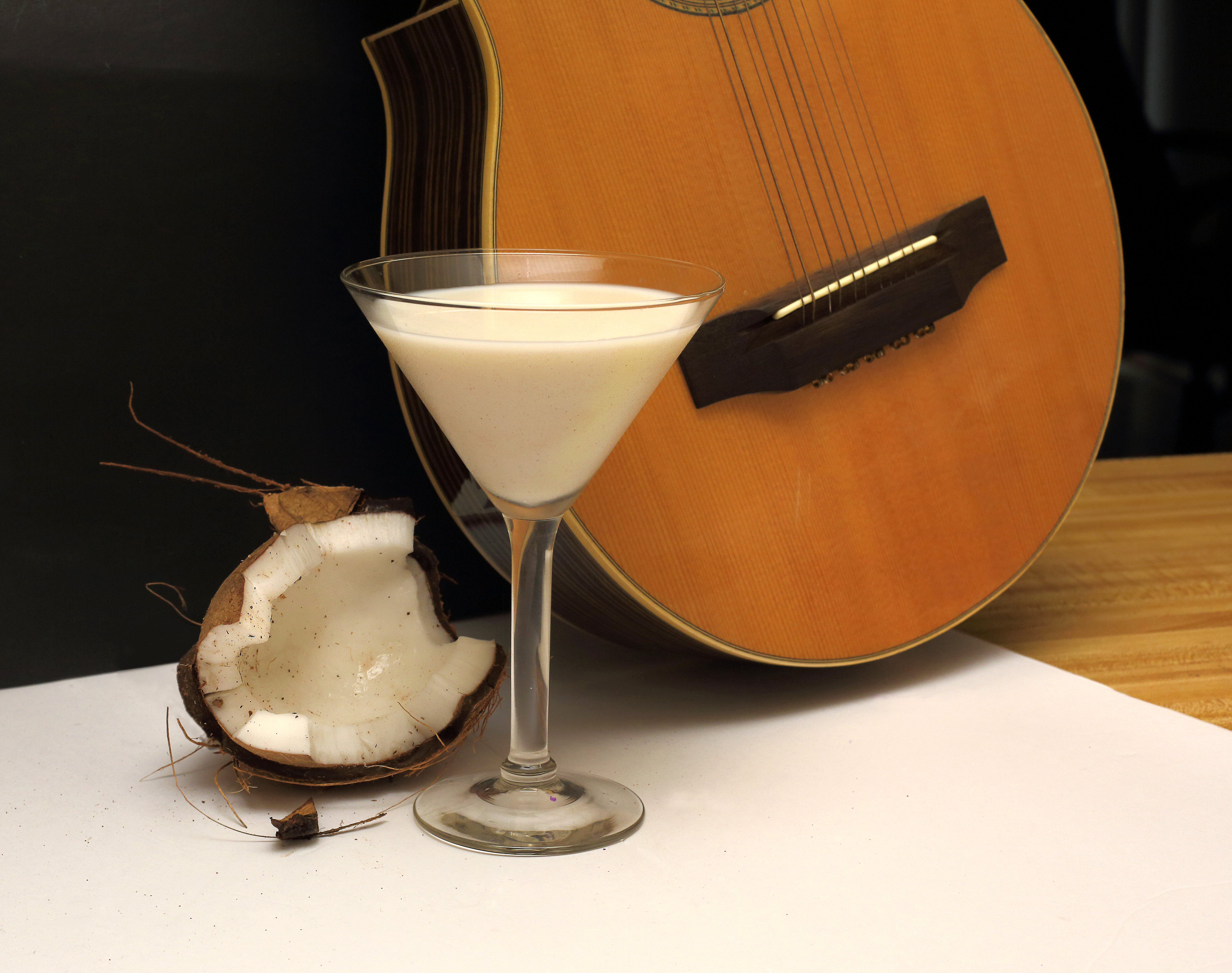 A drink that the parranderos may be served often as they move from house to house is Coquito. This Christmas favourite bears some similarity to eggnog. The key ingredient is coconut milk, to which sweetened condensed milk, evaporated milk, rum, and spices (cinnamon, nutmeg, vanilla) are added. The resultant concoction is thick, silky, creamy and boozy! There is a debate over whether or not you should add eggs. I’m not taking sides here (too dangerous) but I’ve had it both ways and have no complaints either way! In keeping with my neutrality, I offer up two recipes: one from QueRicaVida which includes eggs; and another from The Noshery which does not. You try them and let me know what you decide.

In many Latin America countries, the Christmas celebrations end on January 6 with the DÃ­a de Reyes. In Puerto Rico, however, celebrations can continue for a couple more weeks with the Octavas and Octavitas. The origins of this tradition can be found in the catholic liturgy, even though Christmas is said to end on January 6 with the feast of the Epiphany. Traditionally, after Epiphany there are special services in honour of the three Kings (Wise Men).  Up until 1960, the Catholic Church celebrated this octava de Reyes which starts on January 6 and lasts the eight days until January 13. Even after the Church stopped celebrating the octava de Reyes, it remained popular with the people, particularly those in the countryside. Nowadays, the Octavas and Octavitas are primarily religious traditions which have been dwindling in popularity.

Cuba is quite unique in this regard, mostly because Christmas was only re-introduced in 1997 to coincide with a visit from Pope John-Paul II.  Prior to that, after the 1959 revolution, which led to the country being established as not just a communist nation, but an atheist one as well, Christmas was effectively taken off the calendar of festivities in Cuba. As a result, New Year’s Eve, with no religious ties, became the focal point of the season and any celebrations. Check Time Magazine for more details.

Circumstances are changing and it is becoming more and more common for Cubans on the island to celebrate Christmas, especially from a religious perspective. The festival remains much less commercialised, compared to other countries, and some traditions have withstood the test of timeâ€¦ and politics.

To enjoy your Cuban Christmas you’ll have to love pork, rhythmic parades and sweet deserts.

One of the enduring traditions associated with the festive season, is the roasting of a whole suckling pig. This is the famous lechÃ³n asado that many have heard about, and some lucky ones have even tasted! The roasting process can take anywhere from five to eleven hours, so, as you can imagine, it’s an all-day affair! Particularly in the countryside, where it’s easier to obtain a whole piglet, large gatherings are held during which the meat is prepared and roasted and side dishes are cooked, while friends and family make merry. The lechÃ³n asado is usually prepared for Nochebuena (Christmas Eve) celebrations, or for New Year’s Eve. 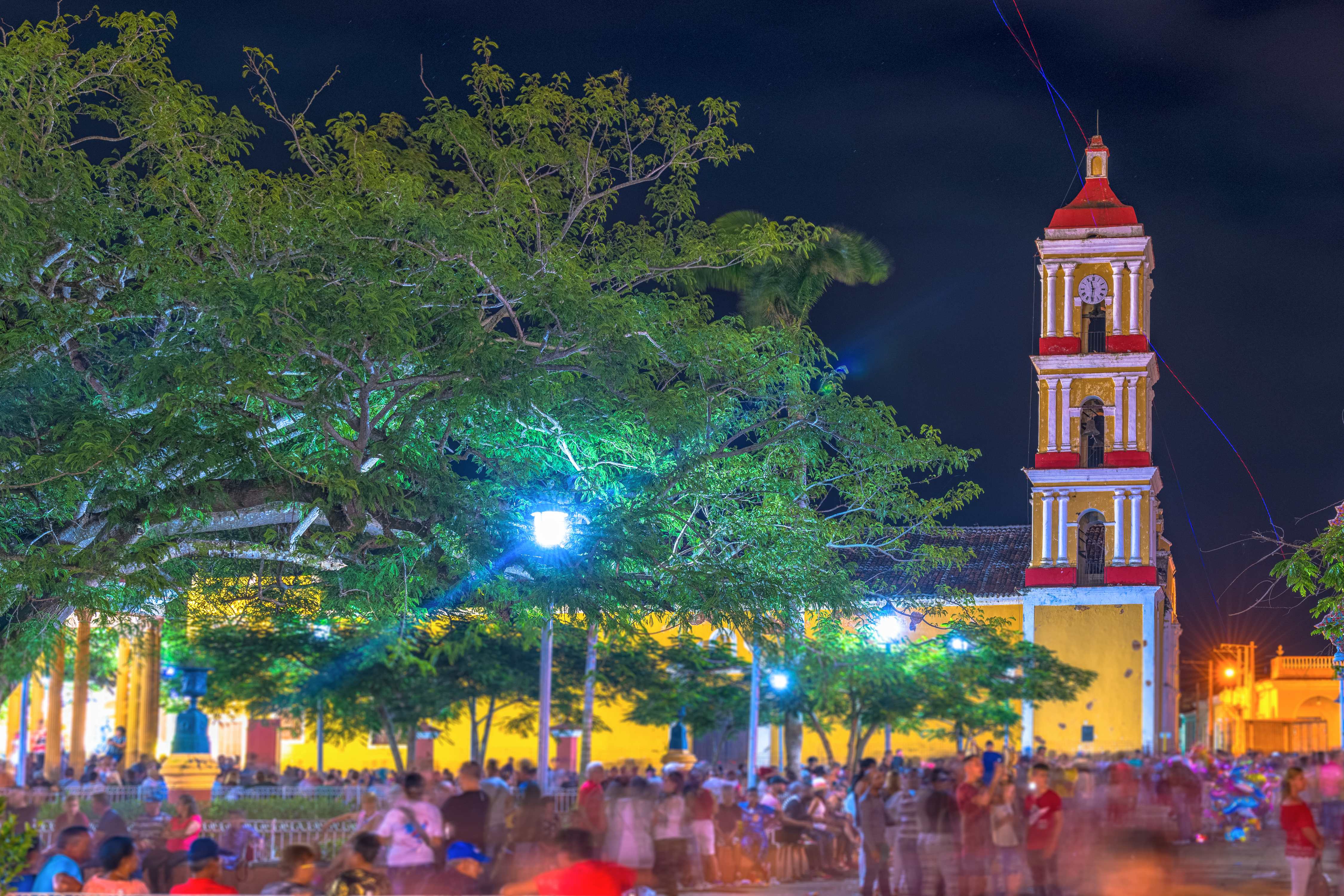 Another loud and cherry celebration occurs every year in the Cuban town of Remedios. Las Parrandas de Remedios dates back to the 18th century when the village priest, in an effort to rouse his tired congregation for the Miso de Gallo (midnight mass on Christmas Eve), got creative. He armed local children with whistles, spoons, pots, jars and plates and sent them out banging their ‘instruments’, singing and generally making a wild ruckus loud enough to get church-goers up and out to mass at the Cathedral of Remedios.

From that band of wild merry-makers a centuries’ old tradition was born.  Today, the festival of the parrandas takes place between the 16th to the 26th of December, annually. Nightly activities include conga groups playing in the street and rumba dance parades with big colourful floats.  The culmination of events is the biggest party on Nochebuena with an incredible fireworks show at midnight and dancing til the wee hours of the morning.

These tasty fried dough snacks are popular in several Latin American countries. Each nation seems to bring their own twist as shapes, ingredients and methods of preparation do vary. The Cuban buÃ±uelos are made from sweet potatoes and yuca. They’re served warm with a spiced anise syrup. Check out this recipe from CubaRecipes.org and another from SweetPaulMag.com which includes the syrup recipe too.

There you go, Christmas traditions in Latin America!

Whether you’re celebrating indoors with a snowy backdrop or outside, maybe even close to a beach, I hope your festivities and truly sweet, memorable and just what your heart desires. 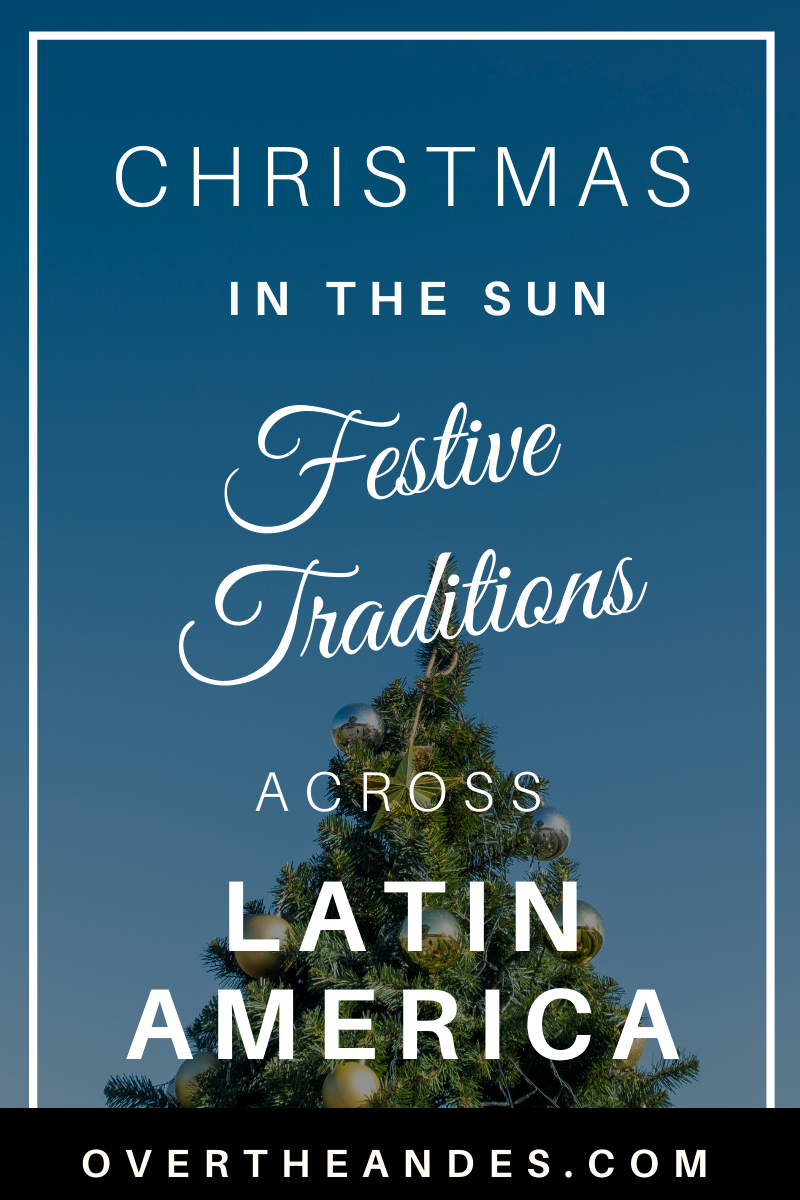