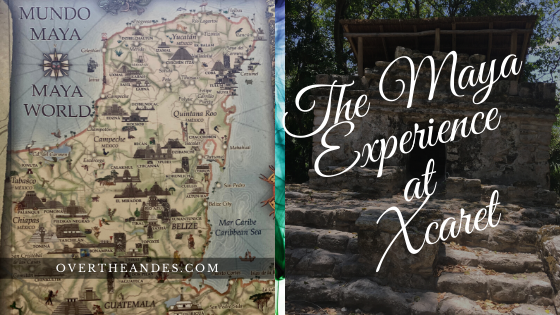 The Xcaret experience of Maya culture:  Time for a little escape from reality and to take a trip, well down memory lane anyway. At the beginning of July last year, I had the good fortune to spend two and a half days in CancÃºn as my husband had some work obligations there. Although it was a ridiculously short time, I was determined to make the most of the visit and take in as much of the Riviera culture as I could. After all, I’d wanted to visit the YucatÃ¡n Peninsula, the land of the Maya, for ages.

I knew we wouldn’t be able to fit in any of the tours to the famous TulÃºm, Coba or Chichen ItzÃ¡. Thankfully, however, the resort we stayed in (Occidental at Xcaret) had several well-preserved ruins and I spent a few hours wandering through them and imagining life on those same spots thousands of years ago. I did also wonder if the many friendly iguanas I came across would have been part of the landscape back then too…

The ruins include remnants of a temple, complete with a ‘throne’ area. That temple lies just a few metres away from the ruins of an early, simple colonial church. In this coastal area, many of the Maya buildings were designed primarily for religious purposes. They would originally have been covered in stucco and painted bright red and blue.

The Maya Experience at the Xcaret Park

The absolute highlight of the trip was our visit to the Xcaret Eco-archaeological Park, dubbed Mexico’s Majestic Paradise. Here’s a link to their website. The park, conveniently located within walking distance from our hotel, is where we spent most of our Saturday. The area is designed to showcase and preserve both the pre-Hispanic and colonial traditions of Mexico, a country that prides itself on its mestizaje. The park takes visitors on a journey through celebrations, dances, exhibitions and culinary delights all against the stunning backdrop of the flora and fauna of Southeast Mexico.

Determined to get the day’s water activities enjoyed first, we headed straight to the River entrance. After gearing up and lathering on (mandatory) bio-degradable sunblock, we began our 45 minute swim along the underwater river. Oh my goodness. What a way to start a day at the park! The water was a bit chilly but the moments when we emerged in the open-air pockets and were caught in the cascade of warm sunlight while surrounded by verdant green jungleâ€¦ heavenly. I can even forgive the part where we swam under the nest of batsâ€¦ yeahâ€¦

Of course, there was more to see there than I could possibly fit into one visit, but I was totally immersed in what I did experience. I spent an intoxicating hour in a chocolate making workshop, trying my hand at crushing and rolling cocoa beans in a traditional metate, after winnowing to make sure we removed the outer shells of the beans. We then added pinches of cinnamon, paprika and sugar to create a rich, smoky chocolate that melted in the mouth. I wish we’d made more! Our workshop leader was knowledgeable not just about the chocolate making process but also about the history and traditions of the Maya of Mexico. He reminded his fellow Mexican participants how important it is to understand and know your own culture.

When we walked out of the workshop we were immediately assaulted by the beckoning, wildly pulsating Maya drums from one of several performances held throughout the day. This particular one was a display of pre-Hispanic dances.

Although the Xcaret experience primarily devotes itself to Maya culture, it also pays homage to the influences of colonial times.  The mix of both is evident in how the dead are remembered and celebrated.  Next, we took a stroll through a cemetery. It certainly wasn’t  as morbid as that may sound. We were able to observe colourful ofrendas set up near many of the graves, and most visitors seemed to appreciate the quiet beauty of the location.

The next stop on our journey through the park was the Mariposarioâ€¦ a butterfly sanctuary which houses and breeds thousands of varieties native to the region.

One last stop for us was the scaled models of buildings that could have been found in Maya cities.  These beautiful models were built for the Xcaret Park in 1994 precisely to help visitors become more immersed in the Maya experience. The models are located right outside a replica Maya ball game court, which seemed ready to welcome cheering crowds and noble feats of athleticism.

The culmination of all the day’s excitement was the Xcaret MÃ©xico Espectacular show. I’d read about the show and discovered travel bloggers who said how great it was. Employees at the hotel told us it would be good, but I suppose part of me remained a bit sceptical. Talk about wasted scepticism!!! It was just as fantastic as everyone said and then more! The show starts with a traditional Maya ball game, followed by a riveting live re-enactment of the Spanish Conquest and even includes the revelation of the iconic Virgen de Guadalupe. The Espectacular also showcases elements of the Mexican Revolution and then explores various elements of Mexican music and dance. It is truly a fantastic display which reveals not just the intoxicating richness of Mexican History and culture but is also evidence of Mexican pride in their heritage.

I had goose bumps, I was on the verge of tears, I don’t think I sat back in my seat even once for the entire thing because I was just too engrossed in what I was seeing.

This is what I spent years studying. The history and culture I learnt so much about was being played out before my very eyes in one of the most fantastic, dramatic performances I’ve ever seen. All the way back in primary school, we learnt about the Maya ball game, an athletic event which also had religious and sacrificial elements. Almost 30 years later, I was watching skilled performers/ athletes play the game on a stage. Wow. I can’t even imagine how much work these guys put in to achieve the strength and dexterity needed to play that game… and even score ‘goals’.

I had a moment of surrealism when I thought about the fact that I was sitting in an amphitheatre, located in an area where thousands of years before these same scenes played out, but for real. The first half of the show culminated in the arrival of and brutal conquest by the Spanish. My hands burned by the time I finished applauding.

The second half was more subdued but equally impressive. Viewers were taken on a cultural journey through the Mexican states as we witnessed displays of their music and dances. The show is proof of the justified pride most Mexicans take in their cultural differences and traditions. The combined diversity of their people makes for a unique, complex and incredible culture. I cannot wait to go back.

I remain hopeful that travel will once again be easy and possible and that I will have a chance to revisit The Mexican Riviera, this time to lounge in a cenote and walk the trails at Tulum. Of course, I also need to get to Mexico City and learn more about the Aztecs, who populated central Mexico. In the meanwhile, I’ll continue to read my books and watch my documentaries from home and dream about it some more.