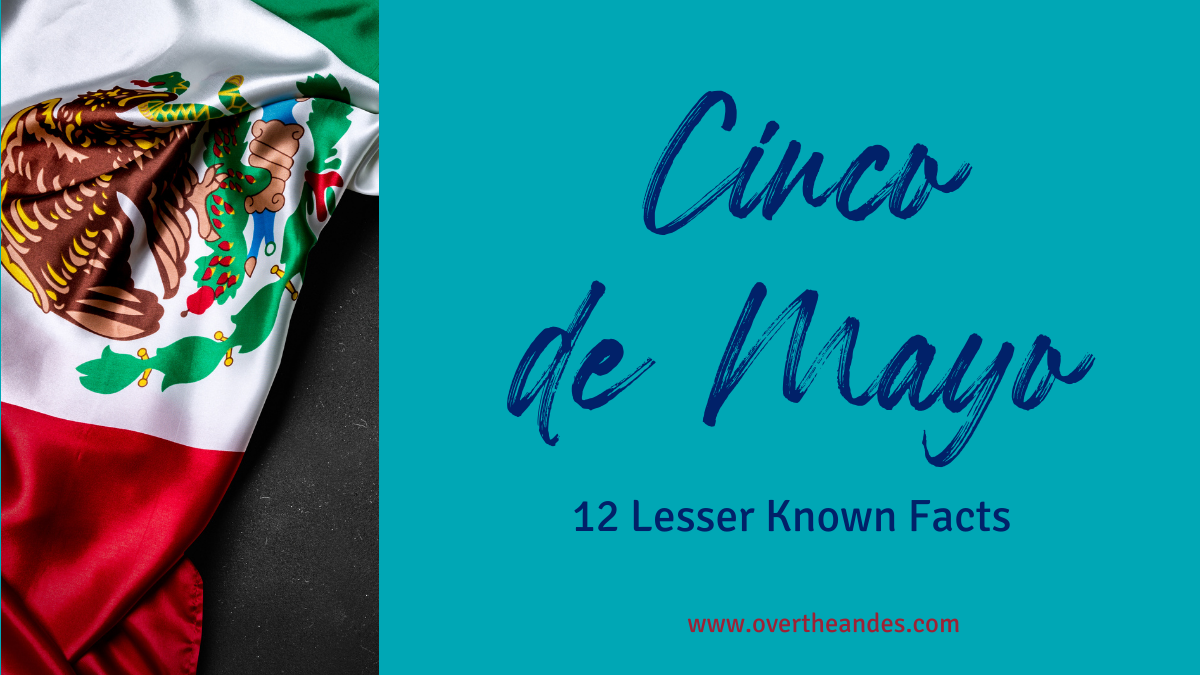 Let’s get to some facts about Cinco de Mayo. Firstly, it’s not Mexican independence but it does celebrate another victory of the Mexican spirit over the binds of European colonialism. Its origins are found in the Battle of Puebla (de los Angeles) of 1862. During that battle, a small, poorly armed and far less experienced garrison of Mexican soldiers, led by General Ignacio Zaragoza, soundly defeated a much larger and confident French battalion. The French were marching from Veracruz towards Mexico City to claim control over Mexico. They never expected to face such resistance and the success of the, smaller but more determined, Mexican forces has ever since been an inspiring symbol of Mexican patriotism and resilience.

You can read more about the battle and the events leading up to it, in this blog post.

We know why May 5th is a day worth remembering, but let’s look at some lesser known facts about Cinco de Mayo history and its contemporary celebrations.

I saw a post recently where a teacher was asking about ideas for activities she could share with her class to commemorate Cinco de Mayo. Sadly, there was an awful lot of ‘shouting’ at the poor teacher from others who were so quick to point out that May 5th isn’t even a holiday in Mexico; that Cinco de Mayo is a far bigger deal in the United States than in the country of origin; that it’s just a commercialised day that means nothing more than high sales for alcohol companies; that it’s a festival which only serves to perpetuate negative stereotypes. Okay, I get it. I understand where every single one of those comments came from. My response: Well, educate! Those issues are exactly why it’s important to teach a younger generation the truth of Cinco de Mayo. Teach them to respect the day. Teach them the history of the day. Teach them why the day was notable in Mexico in the 1800s and teach them why it became a celebration in the U.S. too.

At Over the Andes we’re all about busting stereotypes and celebrating culture. So we’re going to discuss some facts about Cinco de Mayo, how it’s celebrated and how it’s perceived.

1. May 5th is not a public holiday in Mexico. It’s not even a big deal across most of the country. Only in the town on Puebla, site of the original battle, are children given a day off of school to join in festivities. Banks and government offices remain open.

2. The town of Puebla de los Angeles was renamed Puebla de Zaragoza after the distinguished general who led the Mexicans to victory in 1862. The town hosts a museum devoted to the battle, and the battlefield itself is maintained as a park.

3. The Battle of Puebla is also re-enacted every year in Mexico City at Peñón de los Baños. People dressed up in Zacapoaxtla indigenous regalia clash against those playing the part of French soldiers. Thousands gather to see and participate in the festival. You can see some photos from the event here.

4. Although the Mexicans were able to defeat the French soldiers that day in Puebla de los Angeles, the French would still ultimately claim victory and take control of the country for three years. It is because of this that the battle is considered a relatively minor event in Mexico’s long and varied history.

5. More Mole please. Mole is a sauce made with ingredients including chiles, tomatillos, dried fruits, spices and chocolate. The first International Mole Festival was held in Puebla as part of its 2012 Cinco de Mayo celebrations. It’s become a yearly event since then. Almost every Mexican state has its own traditional version of Mole. In Puebla, they cherish their Mole Poblano and try to assert their claim as being the originator of Mole, against the Mexican state of Oaxacca (which is home to the Mole Negro).

To many, especially in the United States, the occasion is also a celebration of Mexican culture and heritage.

6. Some historians argue that Cinco de Mayo belongs to the United States as much as Mexico because the fighting at Puebla prevented the French from aiding the Confederacy during the U.S. Civil War. Latinos (mostly Mexican or of Mexican descent) living in California celebrated the Puebla victory upon learning the news, a couple weeks later. Mexican miners fired off rifle shots and fireworks, sang patriotic songs and made impromptu speeches They would have been among the first to celebrate Cinco de Mayo in the United States. (David Hayes-Bautista)

7. In the 1930s, Cinco de Mayo and the patriotism associated with the victory in Puebla, became an opportunity to honour Mexican identity and promote ethnic consciousness in the United States.

8. President Franklin D. Roosevelt helped popularize Cinco de Mayo celebrations in keeping with the spirit of his 1933 Good Neighbor Policy, enacted to improve relations with Latin American countries. The United States was facing tremendous criticism at home and abroad for their intervention in other countries’ affairs. The Good Neighbor Policy was FDR’s attempt to respect other nations’ sovereignty and improve international relationships.

9. By the 1960s, Mexican-American youths started using the day to celebrate the merging of their two cultures. Cinco de Mayo celebrations grew in popularity during the Mexican-American 1960s Chicano movement in California, when Latinos and abolitionists linked the victory to the fight against slavery.

10. In the 1970s and 1980s, American beer companies began targeting the Latino population in the U.S. It was at this time that the festivities began to be more linked to parties and alcohol.

11. In the city of Longmont, Colorado, where up to a third of the population claims Latino heritage, Cinco de Mayo is celebrated with a Chihuahua competition, in which they crown a King and Queen Chihuahua.

12. Festivities are held across the U.S. but especially in cities where there are large Mexican-American populations e.g. Chicago; Denver; Los Angeles, San Diego; San Antonio; Seattle; and St. Paul. Parades, parties and concerts attract hundreds of thousands of spectators each year.

Cinco de Mayo is more American than Mexican in many ways. In Mexico, May 5th is known as El Día de la Batalla de Puebla, keeping the emphasis on the military actions. However, it is important to understand the story behind the day to avoid cultural stereotyping and misappropriation. Perhaps, Cinco de Mayo is, in fact, a Mexican-American celebration meant to unite two irrevocably linked peoples.

Hopefully these lesser known facts about Cinco de Mayo help you appreciate the day in a better way.