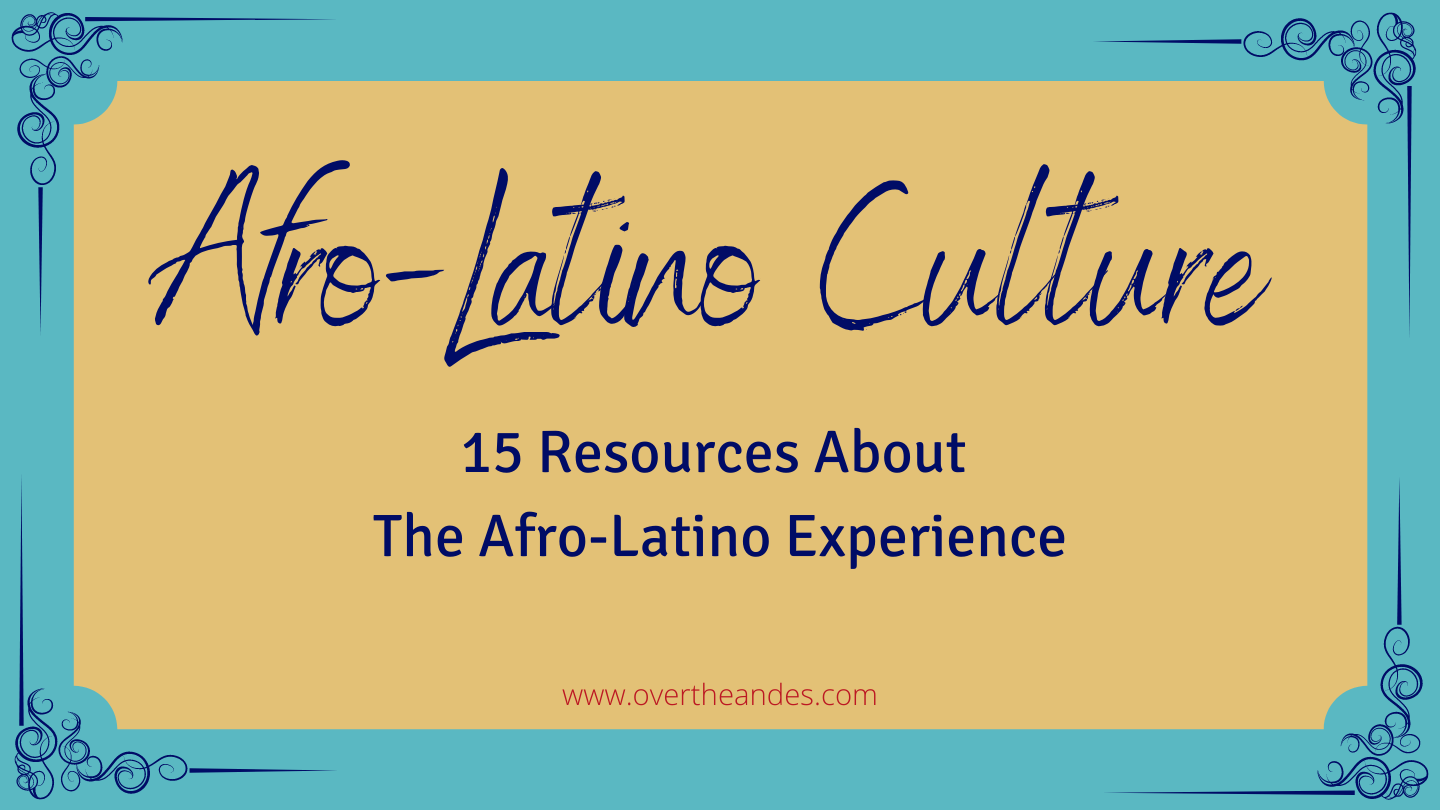 The Afro-Latino experience isn’t one that gets enough attention when we speak about Latin American culture, yet it is a major facet of the region and evidence of a diaspora intrinsically linked to the colonial slave trade.

Latin America is a diverse region. The diversity is seen in its geography, flora, fauna, languages, culture, history and ethnicities. Ancestors of the present population came from almost every continent of the globe, met with indigenous peoples already there, and each group left its mark on the region. Many assume they know what Latino ‘looks like’ on a person. In fact, you can’t know that because Latinos are every colour under the sun. They may speak Spanish, French, an indigenous language or even some hybrid dialect created after the melding of cultures centuries ago.

In my first class for the course, Intro to Latin American Studies, we cover the Afro-Latino experience and identity and that topic is, in fact, the focus of the first written assignment. It’s an important element to cover in any Latin American culture course, but I’ve always felt it to be especially important in my classroom, as we’re located in the Caribbean. Fortunately, I’ve had access to guest speakers who can give real life insight into the Afro-Latino experience as well. Those discussions are usually eye-opening for my students, and I have learnt so much from them myself.

My Afro-Latina colleagues remain amused, sometimes resentful, when others are shocked to learn they are Cubana, Dominicana or Venezolana. In our classrooms we try to change the perception of what ‘Latino looks like’ and a perfect way to accomplish that is to cover the Afro-Latino experience. In doing so, the depth of cultural diversity in Latin America is even more exposed.

I’ve put together a list of resources that cover some elements of the Afro-Latino experience. It is by no means exhaustive. It’s just a teaser, an introduction, and once you start exploring, hopefully you’ll be keen to discover ever more!

1. Pelo Malo is a 2013 Venezuelan short film. The movie centres around Junior’s desire to straighten his curly hair, which is ‘not beautiful’. This leads to friction between himself and his single mother who fears his obsession with his hair is a sign of homosexuality. The movie is set amidst the uncertainty in Venezuelan society when Hugo Chavez is diagnosed with cancer.

2. La Negrada is the first Mexican feature film about the Afro-Mexican community. The film employed local non-professional actors from Costa Chica in Oaxaca (the movie’s setting) to tell the story of two women, Juana and Magdalena, romantically involved with the same man, Neri. The movie also highlights the daily life of those who live in the costal communities.  La Negrada was released in 2018.

3. Remezcla also recently published a list of 10 Films Centered on the Afro-Latino Experience. Lengths range from 3 minutes to 20 minutes and capture various cultural, socio-political and historic issues. I particularly like the short animated movie on Gaspar Yanga. A detailed book on the same Afro-Mexican hero was released by Chris Mercer earlier this year.

Being caught in lockdown certainly upped my FB time in 2020. It wasn’t all panic and confusion, though. I found some wonderful resources, several of which will be incorporated in my classes.

4. I joined the group Incorporating Afro-Latino Culture in Spanish Classrooms on Facebook. There are some fabulous resources and links and discussions available there. Participants share materials and articles appropriate to the Spanish classroom with a focus on the Afro-Latino experience. The group was created by the very lovey Jenniffer Saldañya-Whyte, who was interviewed by ABC News for a feature shown in July. The news clip is only about 6 mins long. Check it out.

5. Here’s a short video I found, posted by Pero Like. This one is entitled What Afro-latinos Want You to Know. In fact, you could follow Pero Like’s page for interesting, funny, sometimes thought-provoking posts.

6. Short news clips can introduce Hispanic culture and be an excellent resource for listening assessments in Spanish class. Here is one from Noticias Telemundo about a new Puerto Rican Afro-latina superhero, La Borinqueña.

7. Another short clip I came across on my Facebook feed (and this might be my absolute favourite) is one by poet and author, Elizabeth Acevedo. Here is the YouTube link. It is a short video of Elizabeth Acevedo delivering her Spanglish poem, Afrolatino hasta la muerte. It is moving. I’ve listened to it several times now and my pores raise each timeâ€¦ and each time a different word or line resonates. I’ll be adding this to my classes.

8. Speaking of Elizabeth Acevedo, she’s a poet and the author of several fiction books, featuring young Afrolatinas living in the United States. I read With the Fire on High in June and absolutely adored it! I got the audiobook and was able to listen to Acevedo herself read it.

9. I also got a copy of Clap Where You Land, Acevedo’s 2020 release. This one looks at the life of two half-sisters- one based in the US and one in the DR. Neither girl knew the other existed until their father dies. The book is about family and sisterhood but also juxtaposes life in NYC and life in the DR.

10. Here’s another one I’m looking forward to reading as well: Dear Haiti, Love Alaine by Maika Moulite and Maritza Moulite. Some of the themes covered in this one are divorce, race, class, immigration, abuse, vodou, and Haiti’s past and present. The narrative of the story is pieced together through emails, articles, transcripts, letters, postcards, diary entries and more. The end result is an immersive exploration of culture and life for one young lady experiencing her Haitian roots for herself.

11. This novel tackles gentrification, immigration and complicated family ties: Halsey Street by Naima Coster. Penelope Grand has scrapped her failed career as an artist and moved back to Brooklyn to keep an eye on her ailing father. Her mother, Mirella, has abandoned the family to reclaim her roots in the Dominican Republic. The two end up estranged and the story captures the perspectives of the two troubled women, living in different places but always connected.

12. I love this docuseries, Black in Latin America. It’s one I use in my classes. I use selected clips for lectures and then also assign video comprehensions and/ or analysis papers using them as well. The documentaries were produced by Professor Henry Louis Gates Jr. and first aired on PBS in 2011. They are available on YouTube:

“Cuba: The Next Revolution“
“Brazil: A Racial Paradise?”

“Mexico & Peru: The Black Grandma in the Closet“

Dancing With the Devil is another documentary I use in my Intro to Latin American Studies course. This one looks at life in the Brazilian favelas and the drug gangs and violence that are part of life there. The struggles faced by those who live that path but want alternatives are considered; as is the issue of police presence or abuses.

To close off the list I also have two more academic type articles (in Spanish) about the role of slavery in Latin America.

Even More Resources on the Afro-Latino Experience!

16. Hella Black Mexican: Not a documentary, but the series does reflect the real life experiences of creator, Ehcrama Marche. This YouTube cartoon follows the life of a young Mexican girl whose life changes whens he realises she’s black.

I hope these resources are helpful in your journey to discovery more about the culture and history of Latin America.