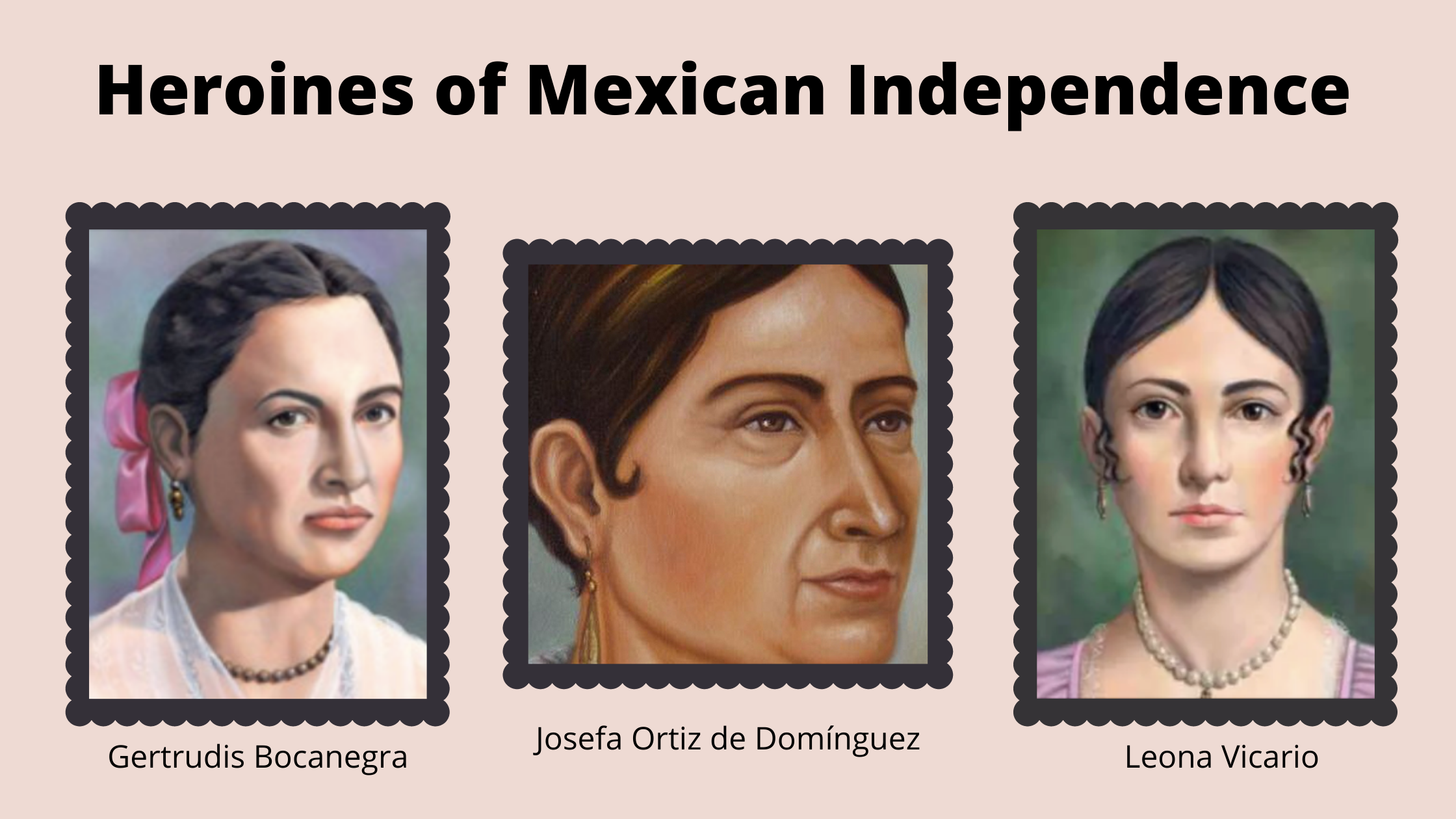 The women of Mexico’s independence story are many. History texts record a few names and leave out far too many details. However, scholars, researchers, journalists and information seekers of the 21st century are making strides to uncover the untold stories of many of the world’s heroines. On September 16, 2020 Mexico celebrates 210 years of independence. To mark the auspicious occasion, let’s look at a few of the heroines of Mexico’s independence story.

To read more about the Grito de Dolores and the beginning of Mexico’s fight for independence, check out this post: How did Mexico win its independence?

When discussing the contributions of heroic women who fought for Mexican independence especially with respect to women of the middle and upper classes) mention is made of their love of the literary. This is unsurprising. For centuries the Church held a tight reign over education. Education was seen as a way of controlling the masses. What was taught and who could learn were carefully restricted. It was feared if women were educated, they would lose their morals. If the Criollos were educated, they might pick up morally ambiguous ideals such as a desire for independence. Education ultimately paved the way to development for many, and opened the eyes of many more to the injustices of their times.

The Enlightenment: The Enlightenment was a 17th and 18th century movement that challenged ideas concerning God, reason, nature, and humanity.  At the core of the Enlightenment was the celebration of reason, the power by which humans understand the universe and improve their own condition. The goals of rational humanity were considered to be knowledge, freedom, and happiness (https://www.britannica.com/event/Enlightenment-European-history). The movement produced numerous books, essays, and scientific discoveries. It also inspired revolutions in France, the United States and Latin America.

Today we may have book clubs, and for many, those book clubs are a chance to take a break from everyday responsibilities and enjoy a good discussion or just relax with friends. For Maria Josefa Ortiz, literary gatherings were much more. Like the other women mentioned in this post, Ortiz was exceptional in her level of education and choice of reading material. She read and spread the philosophy of the French Enlightenment. These liberal ideas (when compared to the thinking of the times) inspired her to support the revolutionaries who sought the independence of New Spain (Mexico).

Ortiz’s upbringing, was also a catalyst. She was a criollo. Her parents were full-blooded Spaniards but she was born in the Americas and therefore considered less-worthy than a peninsular (a person born on the Iberian Peninsular). Her family was of the upper class and although her parents died when she was young, her older sibling ensured she attended the prestigious Colegio de las VizcaÃ­nas where she obtained a distinguished education. It was also while at school that she met and fell in love with the widower who would become her husband.

Miguel Domínguez married Marí­a Josefa and although he enjoyed an excellent relationship with the Viceroy, he supported his wife’s political ideals. He too was against the criollos being treated as second class citizens and encouraged his wife’s work with the impoverished and with the indigenous. Despite the tremendous risk, Maria Josefa used her own home as a place for clandestine meetings to discuss political and military strategy.

In 1802, Miguel was promoted to the post of corregidor (chief magistrate) of Santiago de Querétaro by the Viceroy. This was a sign of the Viceroy’s trust and esteem. Josefa and her husband continued their work with the secret junta led by Miguel Hidalgo y Costilla.

History remembers her as the woman who warned the junta the Spanish forces were closing in on them. Originally, Hidalgo and his group planned to begin their insurrection in October of 1810. However, information on the rebellion was leaked to the authorities on September 13. As Chief Magistrate, Miguel Domínguez was asked to arrest all the insurgents. He was, of course, secretly part of the group. He was afraid for his wife, though, and decided to lock her up to prevent her from meeting the others. She still managed to get word to them and that was why they took the actions they did on the night of September 15, 1810.

Without Maria Josefa’s actions, all the insurgents would have been captured and Hidalgo would never have incited the movement that ultimately led to independence. She also served as a key strategist for the independence movement and obtained equipment and financing for the revolutionaries. For her involvement, she was locked away in a convent until 1817 when her husband secured her release. She died in 1829. Although she did not agree with the imperial rule of Agustín Iturbide, she saw her country free of Spanish rule.

Today her remains lie in the Panteón de los Querétanos Ilustres and she is remembered as a heroine of the Mexican people; one of the women of Mexico’s independence story.

Gertrudis Bocanegra: A Mexican heroine to the very last

Gertrudis Bocanegra was born in Pátzcuaro, Michoacán. Her parents were middle class Spanish business owners and she had access to education resources usually closed to women of her time. Her favoured reading material: works from the Enlightenment authors, was also unusual as access to those works was severely restricted. Well-read women like Gertrudis believed in the values of independence and liberalism presented through the French Enlightenment and saw no option but to support the fight for the liberation of New Spain.

Bocanegra’s husband, Pedro Advíncula Lazo de la Vega, was a soldier with the Spanish provincial forces of Michoacán and served the Viceroy of New Spain. However, he sided with his wife on issues of liberty and freedom for Spanish America. In October 1810, with one of his sons, he joined the forces of Miguel Hidalgo y Costilla when the insurgents passed through Valladolid. Sadly, both were killed when Hidalgo was defeated at the Battle of Calderón Bridge in January 1811.

Gertrudis Bocanegra continued the fight, making use of her ability to speak Purépecha (an indigenous language of Michoacán). She was able to serve as a messenger for the insurgents in the region of Pátzcuaro, helping to weave a communication network between the principal hubs of the rebellion.

Seven years after the outbreak of the war, at age 53, Bocanegra was betrayed and captured by the royal army. Though she was tortured, she refused to reveal the names of other insurgents. She was killed by firing squad in 1817. Up until the moment she died, she mocked the soldiers assigned to kill her.

Today, there is a monument erected in her honour in the plaza in Pátzcuaro. Additionally, in 1936, the Augustine Convent of Pátzcuaro was remodeled and became the Gertrudis Bocanegra Public Library. It is an important cultural centre of Pátzcuaro befitting an educated woman who took a definitive stand to defend the liberty of her country.

You can watch this seven-minute video in Spanish on the life of Gertrudis Bocanegra. Posted by Yolo Camotes on YouTube.

Leona Vicario: Worthy and Sweet Mother of the Fatherland

Maria de la Soledad Leona Vicario Camila Fernandez de San Salvador (Doña Leona Vicario) is another of the women of Mexico’s independence story. During the Independence Wars, she acted as a spy and informant through her work with the secret underground network of Los Guadalupes, whose clandestine activities bore reports of military plans, royalist plans, troop movements and government activities and abilities.

Like Gertrudis Bocanegra, she was captured and imprisoned but refused to reveal any details about those with whom she worked. She was held in a convent, like Maria Josefa, until she was freed by patriots seeking Mexican Independence.

You can read more about her contribution in my 2018 post on the history behind Mexico’s independence.

I hope you enjoyed reading about these women of Mexico’s Independence story. There are more too! Check out this beautifully illustrated post by Cultura Colectiva.