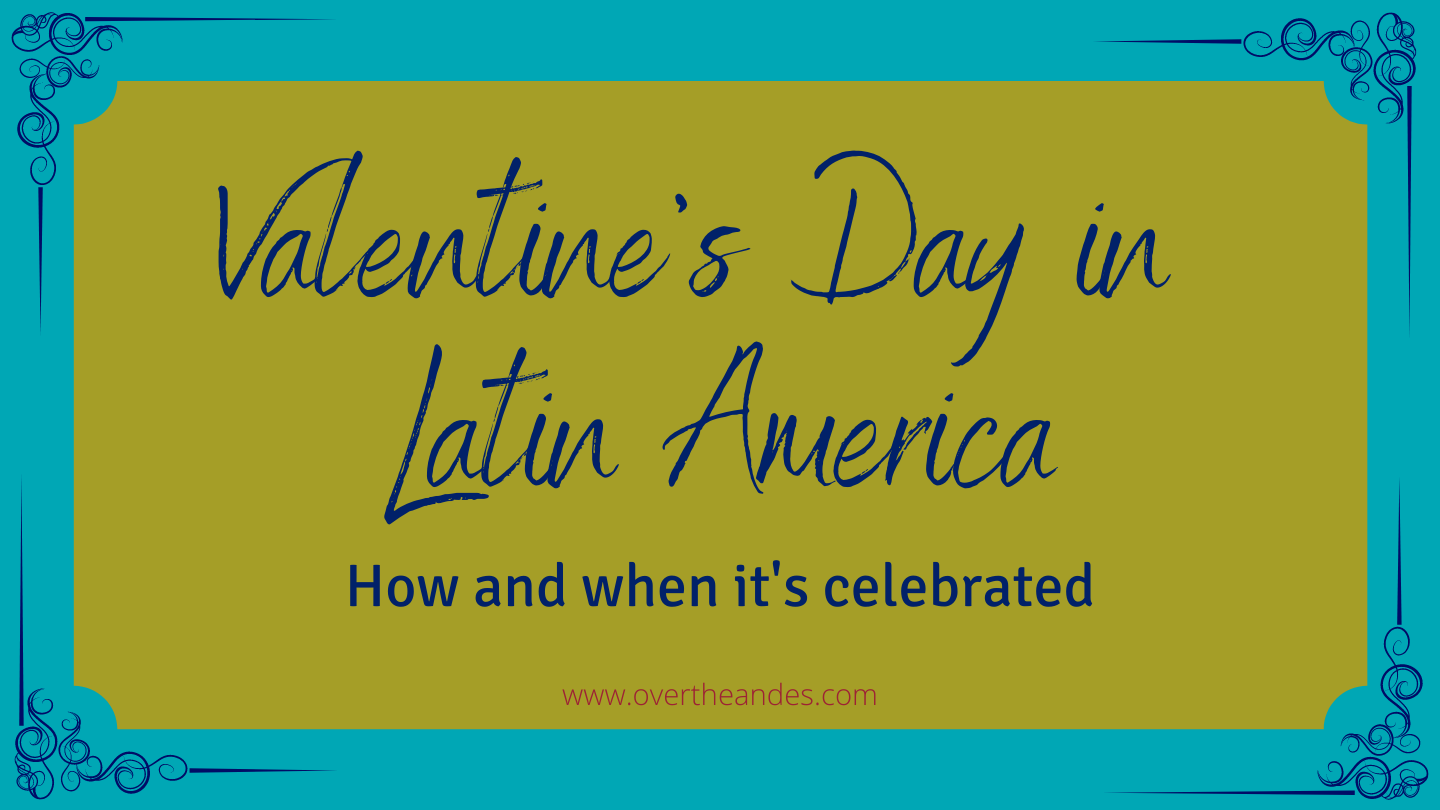 Valentine’s Day in Latin America isn’t very different from celebrating in the United States. However, in some countries the sentiment may be slightly different and more all-encompassing. In other places, the idea of Valentine’s Day is not celebrated on February 14, but on another date more relevant to the host country.

In several South American countries, Valentine’s Day is celebrated later in the year. Read on to find out when! When you’re finished, check out this Spanish lesson to learn some Spanish vocabulary to express love!

South America’s southern tip calls Valentine’s Day El Dí­a de Los Enamorados. Although many business places do decorate with the traditional hearts and the colour red, according to a recent survey, most Argentinians aren’t too bothered about celebrating the day.  It’s a day more widely appreciated by the younger generation, however, and the idea of celebrating love does still appeal to the masses. For those who do embrace the nature of El Dí­a de Los Enamorados, there is an emphasis on spoiling significant others with gifts and sweets.

Speaking of sweets, Argentines spend an entire week showing their affection with sweets. Sweetness Week or Semana de la Dulzura is celebrated from July 1 to 7. A widely heard refrain during this time is “una golosina por un beso” (a candy for a kiss).  The celebration was first introduced during the southern hemisphere winter of 1989, by the association of candy distributors, in an effort to drum up sales.  However, the idea stuck and the celebration of love and affection through sweets continues, although pastries and other baked goodies are also included.

In Brazil, February 14th is very often spent either celebrating or preparing for the massive annual Carnival celebrations, especially if you’re in Rio de Janeiro or any other big city. (Well, when there isn’t COVID-19 to contend with). However, Brazilians still get their lovefest on in July.  Dí­a dos Namorados or Lover’s Day falls on June 12th and is said to honour St. Anthony, the saint of marriage and matchmaking who died on July 13th in the year 1231.  Those who partake in this tradition, do so in a similar fashion to those who commemorate the February 14th Valentine’s Day.  Lovers exchange gifts, flowers, sweets and go out on romantic dates.  Some even decorate their homes and others invite friends and relatives over for a special meal.

In Colombia, folks celebrate Dí­a de Amor y Amistad (Love and Friendship Day) on the third Saturday in September.  The day isn’t reserved for lovers only, and is celebrated with friends, family and even co-workers! It’s quite common for groups to play “amigo secreto“ in the days leading up to Love and Friendship day. Like Secret Santa, participants pull a name from a bag and secretly spoil their selected person with sweets or tokens until the big day and big reveal.  The celebration, although in the same vein as Valentine’s Day, was introduced in 1969 by businessmen who wanted to increase sales of flowers and chocolates at a time of year when most people were preoccupied spending on back to school supplies.  There were also no other major festivals at that time.

In other parts of Latin America, celebrations do fall on the 14th of February. However, for the most part, celebrating Valentine’s Day in Latin America goes far beyond the romantic love between couples. The day is meant to commemorate love for family, friends, neighbours, schoolmates and even co-workers.

Admittedly, in Chile, the date and sentiments are almost identical to those of the United States. February 14th is known as Dí­a de San Valentín, (Valentine’s Day ) or Dí­a de los Enamorados (Lovers’ Day).  As in other parts of the world, there is usually a huge marketing push from restaurants, cafes, bars, jewellery stores, gift shops and even bakeries all in an effort to ensure the patronage of couples looking to enjoy a romantic evening out.

Ecuador celebrates Valentine’s Day on February 14. This shouldn’t come as a surprise as Ecuador is one of the world’s largest flower producers and one of the leading exporters of roses. In fact, the majority of flowers sold in the United States, for Valentine’s Day, originate in Ecuador. (For information on how the pandemic has affected the rose industry, check out this article).

Here, Valentine’s Day is not just about love, but also about celebrating friendship. It can even be said that Andean culture is more centred around celebrating friendship while Valentine’s Day is the commercial aspect. However, there is still a tradition celebrated by some where Ecuadorian men wait for nightfall to serenade their lovers outside their homes. The colour red is favored in decorations and Ecuadorian women wear gorgeous, specially curated red outfits. Of course, red roses are also abundant.

In Latin America, Valentine’s Day activities seem to be shared across borders. Similar to Colombia, in El Salvador, February 14 brings with it the fun game called Angelito or Amigo Secreto, depending on where you are. The game can be played among families, friends, classmates or coworkers. Participants tear a piece of paper, write their names on it, put them in a container and then each person pulls someone’s name. Each person then provides a little gift for the person they selected. Valentine’s Day in Latin America is just that little bit sweeter and often, when it’s time to distribute the gifts, everyone gathers and says something nice about their amigo secreto.

Valentine’s Day in Guatemala is referred to as Dí­a del Cariño. This can be translated to Day of Affection and is quite fitting as, across Central America, February 14 is more about celebrating the spirit of love in all its forms. It’s a day to cherish sweethearts, friends, family and even co-workers. While the focus is on spending time with loved ones, gifts can also be exchanged and couples often plan a romantic night together.

Guatemala City celebrates the day in a very special way with a large parade called the Old Love Parade. The parade features senior citizens and others dressed in costumes or even Maya-inspired dress and masks. Costumed participants ride festive floats through the streets to celebrate the spirit of love.

In Mexico, the 14th of February is known as El Dí­a del Amor y la Amistad, as in many other parts of Latin America. One of the beautiful elements of this day is that it’s about celebrating friendships and cherished relationships, not just romantic ones. Stores and other businesses put out their Valentine’s Day decorations by the end of January. While the emphasis is on the spirit of love, the commercial aspect is pretty hard to ignore, and many still exchange gifts with loved ones. Over-the-top balloons are a favourite, as are candies, flowers and jewellery.

Valentine’s Day may have its roots in Europe, but indigenous Mexican culture also lays claim to celebrating love. The ancient mesoamerican civilizations revered two deities who personified love: Xochipilli and Xochiquetzal. Xochipilli (also known as Macuilxochitl) was the god of love, beauty, flowers, songs (and a few other things). His name means ‘prince of the flowers’ and he is closely associated with Xochiquetzal. Her name means precious flower or ornate bird and she was the goddess of sexuality and fertility.

Move over roses. In Peru, native orchids are the flower of love and they are the star of the February 14 festivities. As in other parts of the region, the day is called El Dí­a del Amor y la Amistad and honours all loved ones. Even neighbours and coworkers get in on the action as the day is not only for those bound in a romance.

Peru’s Carnival season occurs just before Ash Wednesday, and often falls in February, coinciding with the love celebrations. Thanks to the widespread Carnival activities, February 14 sometimes ends up being a holiday. With the increased number of people in major cities and many couples wanting to exchange nuptials on the day of love, some venues end up hosting mass weddings to accommodate the influx of couples!

El Dí­a de San Valentín in Puerto Rico is celebrated as elsewhere in the region. Love in and of itself is celebrated with partners, family members and friends. In some places there are large public parties, while others prefer large family gatherings or perhaps intimate dinners for two.

Regardless of what it’s called or when in the year the festival actually falls, celebrating Valentine’s Day in Latin America is an occasion to let those closest to you know how special they are. ¡Feliz El Dí­a de San Valentín!