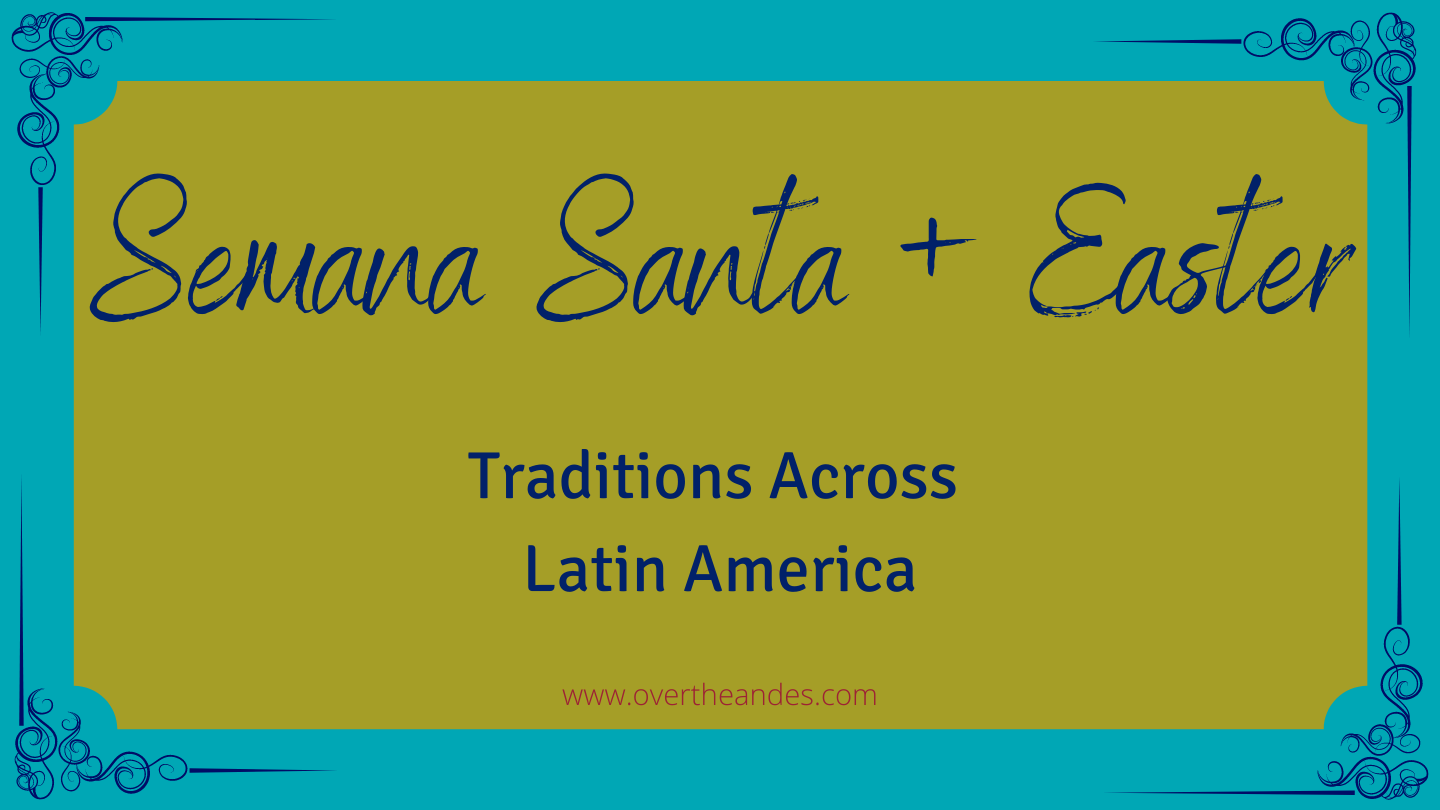 Semana Santa in Latin America is an incredible affair. The week immediately precedes Easter and is observed through an array of events. In this predominantly Catholic region, celebrating the life, death and resurrection of Jesus Christ is a rich annual tradition. Not all customs associated with the observance are religious, and for those not engaging in any of the many prayer vigils and masses, the long weekend provides ample time for partying, meeting up with family and relaxing.

What is Semana Santa?

Semana Santa translates to Holy Week and is the last week in Lent (Cuaresma), right before Easter. For Christians, Lent is a solemn 40-day period of sacrifice, prayer and reflection when the faithful imitate Jesus Christ’s fasting in the wilderness. During Lent, most Christians refrain from specific pleasures and many engage in a meatless fast on Fridays; some do so for the entire forty days. Semana Santa is the culmination of this period of penitential preparation for Easter and begins on Palm Sunday (Domingo Ramos) and ends on Easter Sunday (Domingo de Resurrección/ Pascua). The major celebrations of the week occur on Maudy Thursday (Jueves Santo), Good Friday (Viernes Santo), Glorious Saturday (Sábado Santo) and Easter Sunday. In most countries, across Latin America, Maudy Thursday, Good Friday and Easter Monday are holidays providing an extra-long weekend to engage in traditional and recreational activities.

Guatemala enjoys a most beautiful Good Friday spectacle in the colonial city of Antigua. Thousands gather to watch or participate as large, heavy, fantastically decorated wooden floats are carried through the streets for hours, to commemorate the passion, crucifixion and resurrection of Christ. Due to the tremendous weight of the floats, carriers change out every twenty minutes or so. However, it is considered quite an honour to participate in this event, so the list of volunteers is remarkably long. The artistry of the event is not confined to the floats. Before the parade begins, residents coat the streets in creative, colorful carpets made of coloured sawdust (aserrín), fruit, flowers, and pine needles. The carpets are carefully preserved for the parade but are instantly destroyed once it begins.

The Brazilian town of Ouro Preto (Black Gold) is another one where creativity is expressed via temporary street carpets of sawdust. A town semi-preserved in history, Ouro Preto is home to 13 baroque churches and impressive colonial architecture. There are four parishes in the town who all work together to facilitate Semana Santa events. There are at least eight different processions held over the course of the week but the largest and most beautiful is the one held in the early hours of Easter Sunday. Hundreds of local women and children dress as angels and are joined by costumed biblical characters, altar boys and a brass band to process down the streets of Ouro Preto. The streets are coated with murals made of coloured sawdust and flowers.

Across the region parades and processions are held to commemorate the Passion of the Cross (Viacrusis). However, a few stand out among the crowds… and attract them too!

In Quito, Ecuador we find one of the largest Good Friday processions in South America. Dressed in purple robes and purple pointed hoods, male penitents (known as cucuruchos) walk for five miles through Ecuador’s capital, alongside thousands of devotees carrying candles and praying. To replicate the pain and suffering of Christ, the penitents wear crowns of thorns on their heads, carry heavy wooden crosses and sometimes drag chains with their bare feet. Hundreds of thousands of spectators flood the streets of Quito to see the procession and witness the carrying of the statue of Jesús del Gran Poder. The statue comes out only this one time for the year and is guarded by a special, armed police unit. Read more about Holy Week in Ecuador here.

In Cusco, Peru the main Holy Week procession occurs on Holy Monday and is meant to commemorate a different event. The day is dedicated to the patron of Cusco, the Lord of the Earthquakes (el Señor de los Temblores). The Archbishop of the city offers an early morning communion mass in the Cusco Cathedral and in the early afternoon the procession leaves to parade around the historic city centre. The procession heads out carrying a 16th-century statue of the crucifixion of Jesus Christ. In 1650 a devastating earthquake hit Cusco and successive tremors continued to rattle the city. During the chaos, a dark-skinned statue of Jesus, el Señor de los Temblores, was paraded around the city in defense of the city and people. Shortly after, the earthquakes ceased. Credit was given to el Señor de los Temblores and an annual celebration, to remember, began.

Re-enactments of the Passion of the Cross / the Way of the Cross are held across Latin America. In Mexico City borough of Iztapalapa one of the most elaborate passion plays began during a 19th century cholera outbreak. After 5% of the city’s population died from the disease, residents visited the Santuario de Señor de la Cuevita to pray for relief and promised to hold an annual procession. Only eight people died after that visit and so the annual custom continued. Today, the lavish staging of the event includes over 5000 participants and attracts millions of spectators.

Perhaps the youngest, but most atmospheric of the processions takes place in the small town of Tañarandy, Paraguay. The procession was started in 1992 by local artist, Koki Ruiz, who originally started a procession to reflect on the Stations of the Cross. The activity has grown and developed into a spectacle that attracts tens of thousands each year. Thousands of candles, made from oil and beeswax set in orange peel bases, line the streets for the night time procession led by Estacioneros (lament singers). Another integral part of this Good Friday event is the Cuadros Vivientes (living pictures) which entail theatre actors staging paintings by famous painters. Find out more about this event and see some photos.

Some other Semana Santa traditions

In a village in Guanacaste, Costa Rica, there is a 200-year-old Good Friday tradition that has nothing to do with religion. This tradition is all about the hunt. The event is called la lagarteada and does not have a precise English translation. The custom calls for a group of people to enter a river full of crocodiles to capture a live one; better yet if it is the largest in the area (el largarto). The croc is subdued and taken to the local square where it spends the day on exhibit in a special cage. The following day, the animal is released where it was caught. The tradition is thought to have its roots in a mixing of Spanish and indigenous beliefs as capturing an animal considered sacred, on this day, was symbolic with the sacrifice of Jesus Christ.

La Quema Mal Humor / Quema de Judas: Effigies of the traitorous disciple are created only to be burned on Good Friday (or exploded with fireworks from within). It is meant to symbolise a cleansing of evil but doesn’t quite fit in with the Easter liturgy! The Judas burning tradition is common in Venezuela, Mexico and Brazil and is no longer confined to Judas. Often the effigies are of controversial political figures as well. There is also the related Quema del Año Viejo to see off the old year and welcome the new.

In Argentina, there is the Tierra Santa (Holy Land) theme park. It is a huge recreational area where visitors can walk the recreated streets of Jerusalem, as described in the Bible. Visitors are also treated to step by step experiences of scenes from the life of Jesus Christ. Tourist numbers to the park, unsurprisingly, spike at this time of year.

Food for the season

Empanadas de Chiverre are a Costa Rican favourite during the Easter season. Chiverre is essentially a squash that is native to Latin America and is abundantly available at this time of year. The chiverre is turned into a sweet, dark brown, jam-like substance to stuff the empanada. The empanda itself is made from wheat flour (as opposed to the more traditional corn flour) and is baked, not fried. The resultant sweet and savoury mix is a delight to the senses. Check out this post from Pura Vida Moms.

In Ecuador, there is a traditional soup or stew to be enjoyed on Good Friday. Fanesca is made from twelve grains (to represent the twelve disciples). In keeping with the Lenten fast, there is no meat in the soup. Salted cod is used instead and it is combined with milk and potato dumplings.

Habichuelas con dulce is a favourite Lenten treat in the Dominican Republic. It is essentially a drink made from a sweetened cream of beans! Yup. Beans. Red beans, sweet potato, raisins, sugar and spices are made into a creamy drink best served with sweetened crackers or toasted cassava bread. Read more about the origins of this dessert.

And that’s just to name a few! Semana Santa and Easter traditions in Latin America vary from country to country and even within each country. It remains, however, a major festival across all of Latin America.